Who is the greatest player to ever grace the football pitch?

It is called the Maradona turn, it always has been, the only people I have heard say Zidane 360 are Americans.
Top

I thought his first name was Zinedine. Those Frenchies are a strange lot.
Top

I wouldnt say complete. Steven Gerrard and Wayne Rooney are more complete than him and thats saying something.

His dribbling was the greatest and had brilliant touch but he is far from complete.
Top

it makes sense if you realise what complete means. Rooney has a little bit of everything including defense maradonna just had everything in offense.
Top

I disagree. Maradona is the type of player who if he loses the ball (which he rarly does

) he will work hard to get it back. Also he has everything in offense because he plays mostly offense haha.
Top

When has Maradona ever lost the ball, maybe 3 times in his career, and the amount of sacrifice he made for his team was amazing.. He nwould run back and try to recover the possesion for his team -

Rooney is more complete than Maradona, in the same way he is more complete than Messi- Messi and Diego, only have one leg, and inmortal lefty which is enough to own the football world, but still are mostly one footed and aren't so good in the air, or other skills that players who aren't complete freaks have to develop - For Diego and Messi its enough to have a ridiculous left foot, that scores freekicks, leaves 3 players behind with total ease, which makes a pass between 3 defenders automatically, so they don't need to be complete, they can destroy teams with that 1 left leg -
to know Him is to want to know Him more"

messi's dribbling style is interesting. right foot controls the ball, left foot guides it. however i think he needs to either a)win a WC b) win more than three ballon d'ors c) win a lot of CLs before he can be mentioned in the same breath as the likes of Cruyff, Pele and Maradona
Top

here's your sole vote for ronaldo lol. i think he is the greatest because he could go through 4-5 people each time, he could head, he could finish with both feet, he could take free kicks and he was pretty damn consistent. at one point he was the perfect combo of speed and power... i think he's one of the most, if not the most complete offensive player to play this game. Idk why but I'd rather have Ronaldo on my team than Maradona
Top

Not to change the subject, but, my all time favorite great player is Garrincha!

The way that man dribbled is astonishingly beautiful. Plus, he singlhandedly won the 1962 World Cup without Pele ...

And the dreams that you dare to dream, really do come true
Top

I blindly votes Messi, but after actually thinking about it I've got to say Cruyff.

Just like shashena said, until Messi wins some serious silverware, he can't be considered 'the greatest player'. I'd consider him one of/the 'best' players, but greatness is about more than just technical ability, such as overall contribution to the team, and like mentioned - silverware.

Remember though, next world cup Messi will be 27 - That's usually the prime age. We'll see if he can become one of the greats in Brazil in three years time. 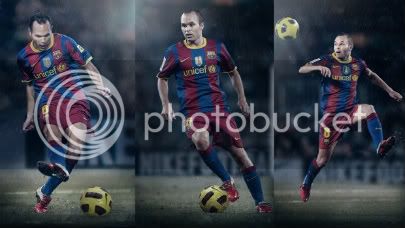 Everything you need, is already inside.
Top

Here is an example of Maradona chasing the ball.

well, the polls show a tie between pele and maradona.............what a surprise......even the people who gave the player of the century award couldnt decide between those two