while watching a documentary about the rivalry between Brazil and Argentina on FSC, I wanted to ask the question

I used to think Pele but i figured thats only because i like him better.

Maradona is better. He became pro at 15, played for Boca, then Barca where he won alot. Went to Napoli who really werent known for being a potential challenge of the italian title....and he won there. Had his little drug sesh but to renowned as the best player in the world i think youve got to win the world cup.

Both Pele and Maradona did. But in saying this Maradona kinda did it by himself where as pele was surrounded by world class players.

I think Johan Cruyff is the best ever but he didnt win the world cup. He revolutionised football, he played simple yet difficult.

Zidane also domainted at many different top clubs, won a euro and a world cup, hes known as one of the best.

To be realistic, if Messi leads Argentina to the World Cup and he has an influential role in it he will be up there with the others, i can guarantee you that.

I think eventually Messi and Ronaldo will be up with the greats, regardless of winning the world cup.

It isn't all about winning the world cup. In my opinion, the two greatest footballers in history never won it. George Best and Cruyff were in my opinion the best ever to watch and skill and natural flair were just unplayable. In terms of biggest impact however, Pele and Maradona. It's difficult to compare them.

You say Maradona had a sh*t team and won the world cup on his own? He also cheated to win the world cup. Pele was surrounded by the best in the world? But he was 16 and still outshone them. It's all opinion, i prefer maradona because he was the best to watch as in long dribbles and creativity.
Top

In North American sports, much is made if you finish your career with all the stats, but have never won a championship for yourself, but in football, most look past the WC to your individual prowess. The World Cup is perhaps the hardest trophy to win in sports. You only get one shot every four years, as opposed to annually, and there really isn't much you can do if your country is not up to scratch. Only seven countries have ever won it, if I'm not mistaken. While it is true a number of legends come from those countries, no one begrudges Cruyff because The Netherlands could never get it done.

Pele was 16 or 17 when he outshone his teamates, the rest of the World Cups, he wasn't even the most participant of Brazil, other players scored more, assisted more, did more. He did lead Brazil to the 58 World Cup, but in 62 and 70 he wasn't the main star, and had particularly in 70 had one of the best teams the world had seen in history.

Maradona was the best Argentina player, did lead the argies, but was 10 years older than Pele- To say that he cheated in the world cup, would mean that you had to treat every that "cheated" player with the equal judgement. From Rooney, to Messi, to Ronaldo, .. I don't know if your willing to get that picky. And Terry Butcher, in the goal Maradona beat 6 players, slid and tackled Maradona, going directly to his right ankle I believe, Maradona said it popped, but he kept playing, after the game he looked at his ankle and it looked like a tumor, heres a pic: 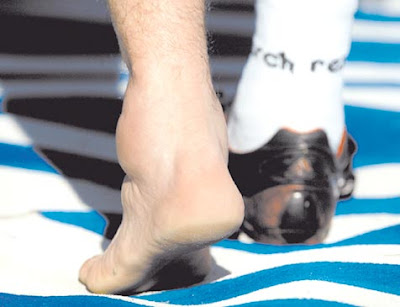 On Drugs already, he lead an ugly playing Argentina to the final in 1990, beating Brazil, and Italy the hosts. He lost the final, and their are strong Rumors that Joao Havelange, a brazilian proven to be corrupt, president of the Fifa at the time, and followed by blatter, that he gave instructions to the Mexican referee, to do anything possible for argentina not to win .
to know Him is to want to know Him more"

But are you seriously comparing Maradonas "Hand of Crack" with players like Rooney/Ronaldo/Messi going down easy from fouls?

The difference with Pele was he didn't want to be the main star, he just played so his team won, and regardless of how many assists he got and how many goals he scored, I don't think Brazil would have as many world cups to their name without him. There is more behind winning a game of football than just goals and assists.

Yes I know Maradona did not go down easy, but as far as I know, he had already slotted the ball into the goal before that sliding tackle came in, and he was completely flattened by it and if he had not have scored he would have probably been on the floor for quite some time protesting.

Sure, the times were different, both are considered the best in the world, but before pele, argentina always beat brazil, and pele changed that single handedly. He could do it all, head, shoot, control, pass, mark, dribble, he was complete.

It's all a matter of opinion and in the past this threads been done to death but IMO it's Pele.

IMO every so often a player (or group of players) come along and change the way soccer is played. Maradona played a huge role in soccer becoming more skillful, and deserves a lot of credit for that. But for me Pele accomplished what no other player has been able to do. People often drop the "he was surrounded by stars" and "he never played in a major European league". That's all good and well but IMO he's still the number one player in history.

And to say he wasn't always the star while on the field is crazy. He was, still is, and probably will always be the most famous soccer player. People who couldn't name a team, rule, etc, about the sport who know who Pele is.
Top

I think Pele is better and it comes down to a few things (accomplished more, scored more, etc.) but for me it's mostly that to be the best player, I feel that they should be 2 footed and Maradona didn't have a right foot while Pele could use both feet equally.

thats exactly how i feel about maradona AND messi
Top

So if a player was one footed but could wreck any defence in the world and scored 40+ goals every team they played for and won the world cup single handedly, for example, that would mean they are not as good as someone who done maybe slightly less but with two feet?

I'm not disagreeing with you because I do feel the same that Maradona was severely one footed, but that wasn't a flaw in my opinion, he could strike the ball perfectly with both feet, it just so happened 99% of the time he felt comfortable using his strongest foot to destroy people.

IMO a player who is better to watch is better to watch, doesn't matter if they play with every part of their body or if they exclusively dribble on all fours, what they do that makes them so great to watch is what is important, and for me, Maradona had so many more "holy sh*t" moments than Pele did, but then again I'm not from that time period so you could argue that's a seriously lacking of credibility.

I said it before and i'll say again, It's 100% opinion on who you prefer watching that makes a player the best in the world, many people still think Ronaldinho is the greatest in history, and to be honest i can see why someone would say that after looking on youtube for 5 minutes.
Top

Yeah I agree with KLC, you don't need 2 foots if you have one really good one. Hint Maradona, Messi, and Rivaldo.
to know Him is to want to know Him more"

I think the main problem was and is, that a lot of Pele's success and playing career came at a time when televised soccer was rare. Much like a lot of other celebrities from the 80's, Maradona capitalized on rampant media attention. Everyone remembers the Goal of the Century and such, because we all saw it on TV, and it's still replayed to this day. There is significantly less footage of Pele, even though there is a relatively large amount on him compared to other greats of his day.