Your Thoughts on EURO 08

Well. he's said he wants you to back up what you said when he called Cristiano a "diving sh*t" or whatever, and so far you haven't backed up your claim.

....boy do u have a life...just as scottybitch does right? lmao this is such a waste...anyways thats my last post, don;t write anything cause I'm not responding to idiots cumbags like sb. peace
The testicles of a "right whale" weigh 1100 lbs each.......

I agree with a lot of what u said Hugh, but weren't there like 50 arrest after the Dutch lost

, and if I'm wrong replace the

It can be difficult for the untrained eye to realize that England fans are actually very friendly, they just choose to express their goodwill by excessive drinking and rioting (and who doesn't once in a while?

) What you may perceive as riots are actually play fights on a larger scale. 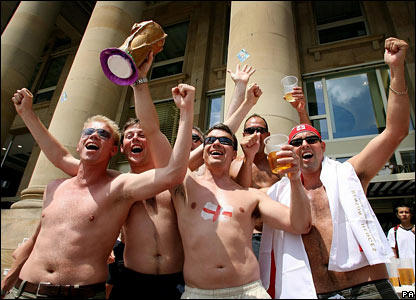 Everything has to be about the English... even if they're not involved

MY THOUGHTS ARE WELL VIVA ESPANYA...the best team came out on top and that would be the..the..the..SPANISH whoot whoot,TORRES scored the winning goallll which like made my day,this is the best euro i have ever seen!

oh and kakasgotskillz of course everything has to be about the english i mean,well its the english,torres is going to have one great season with liverpool,ill bee cheering out from the KOP whoot
Practice and drive are all you need, You will become good, if not great, and then, if you wish to go further, the opportunities will come to you - Rome_Leader I can't wait to see the team Arsenal's prepared for us this season. Oh, and Spurs too. That'll be quite nice to see if Spurs can finish top four this season.
Top

ForzaMilan wrote:Im sorry messi19 but it kind of makes me cringe at the fact you're english, you live in England, you support an english club, yet you despise them, and instead you decide to support Spain. How do you even consider yourself a football supporter? You're half portuguese yet you support Spain? Sorry for going off-topic but I just think it's ridiculous.

Im not fully English! I was born in Portugal and moved to England when I was 5. I consisder me being Portuguese so thats why I support Portugal. I only supported Spain in the FINAL! Because I hate Germany and some of my friends are Spanish and I have been to Spain lots of times on holiday. I would never support Spain over Portugal. I have Portugal blood in me.

trust me i;m not hte one with hte issues

haven;t been on here except for 2 times in 9 months


your not the one with hate issues

you initially tore into me (like a wanker) for having a go at messi19 yet forzamilan comes out and says he isnt a football supporter and you say nothing which shows how sad/narrow minded/whatever you want to call it, for going after me alone

you say you love arguements over the internet with people like me, i dont think i need many peoples opinions because that clearly is sad

but anyway seeing as you've made your last post i guess i'll argue with you in another 9 months, hahaha actually reminds me of the film "catch me if you can" when leonardo di caprio calls tom hanks every christmas

are you a criminal mastermind by any chance or just a loner?[/b]

Definitely a tournament of underdogs. Im surprised a lot of teams didnt go as far as i thought they would. The Netherlands was a big surprise loss. I thought they were for sure going to go all the way.

Overall, Euro this year was kind of a disappointment for me. I mean my team went nearly all the way so i cant complain about that. But the final was a pretty lame way to end the tournament. Very boring, but I guess thats usually how the Spanish team is.

yee xavi won the best player of the tournament according to uefa.

they also announced the 23 man team and Cronaldo isnt on the list......omg shocking!!!!1
Top

Puyol was by far the best centreback in the wole tournement......I hope Arshavin comes to barca, he was great alongside Pavlychenko.

barcahooligan wrote:Puyol was by far the best centreback in the wole tournement......

That's not saying much...

this might be slightly off topic but how do the real madrid players (ramos, casillas) get along with the barca players ( puyol, iniesta, xavi) ?
Top

canadianfootballer wrote:this might be slightly off topic but how do the real madrid players (ramos, casillas) get along with the barca players ( puyol, iniesta, xavi) ?

Because there playing for Spain, not Barcelona or Madrid. There you used to be problems in the past with Barca and Madrid players not getting on. But I think they realise that they have to get on with each other so they will win tournaments.

I WRITE EVERYTHING FROM MY iPOD TOUCH!
Top
Post Reply
72 posts