Funniest or most shameful incident

Tell us about the league you playing in, tryouts, etc
Post Reply
27 posts

Funniest or most shameful incident

omg this just came up to me.. cause something funny happen when i was playing. this guy shot a long ball so i head it.. and it went straight to the refs head everybody started laughing.. this was so funny.. it was a pk.. so i pound the ball for a curve with my left and it hit the post but the goalie was infront so it hit his head and went in.. what a goal.. the worst is when... i was playing by my self and i just kick the ball as hard as i good.. except i missed and splipt and just did a splat on the ground.. how about u guys?
Top

i got a good one. this one time i was playing a game and i cleared the ball. Then some idiot comes and tries to knock me down. this was back when i still had a bad temper. he fell down when he tried to knock me down and i yelled "you deserve it" really loud. I got a yellow card, but my coach thought i was hilarious.

one time in practice i tried to cream the ball right in front of everyone and i hit the ground with my toe hurt soooooooooo bad and everyone laughed at me. Then my coach after goes "Know why you dont do that, cause you ruin the grass" felt like an idiot for the whole day and my ankle still is tender from that.
'Sometimes in football you have to score goals.' - Thierry Henry
Top

All I can remember is one time I easily dribbled through 2 defenders and the keep at one part of a pretty big game and when I was about to just pass the ball into the net I slipped (It was raining the whole game) and fell down before I hit the ball, so the keeper came and picked it up and I never scored

once i fell when i was taking a throw in.... everybody was laughing

and today i have had a match and i was so angry because refree was against my team, and he gave fouls to the opposite squad every time they shouted....
it was 90th minute, i was in a great run, and one guy just touched me softly, but i jumped and fell like i was hit by a train, that happened near my coaches bench..... that guy told me: "don't be silly this is not a foul"
when i saw that refree was about 20-30m form me i just put finger on my mouth and said: "shhhh! i wasn't born yesterday, i can also simulate foul" but it sounded so funny and that guy laughed, and my coach laughed, and all of my friends laughed ....

One time I remember a kid tried to kick a a ball and his shoe went flying through the air. Another kid on my team volleyed the shoe into the goal. He pretended that he scored and started celebrating. The ref gave him a yellow card, but everyone thought it was funny.
Top

one game my team was up 1-0 with like 20 minutes left and my coach wanted us to get more goals for points (it was in a tournament) and a teammate dropped the ball to me i was im between and the 18. i hit the ball as hard as i could and fell but to my suprise my shoe flew off and went into the goal and the ball flew way over the goal it was hilarous everybody on my team made a joke and said that i scored. one kid on my team went to the ref and (was joking) asked the ref if it counted as a goal cuz my shoe went into the goal.the ref said nice try but no the ball has to go in the goal not the shoe. 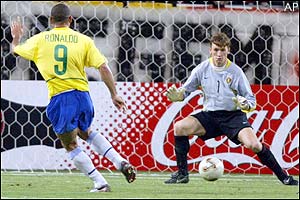 soccer11 wrote:i got a good one. this one time i was playing a game and i cleared the ball. Then some idiot comes and tries to knock me down. this was back when i still had a bad temper. he fell down when he tried to knock me down and i yelled "you deserve it" really loud. I got a yellow card, but my coach thought i was hilarious.

thats not funny its weird. u shouldve yelled hhahaha

I got nutmegged by the keeper, it was quite sad.
Still thinking of a siggy!
Top

Never give up keep training and reach to your goals Its all depends on YOU!
Top

We were playing in a terrible rainstorm and the ball plopped down and stopped in a deep puddle right in front of our bench and the grandstands. I came at the ball quickly intending to sprint with it straight down the open sideline, but when I stepped into the ball it hardly moved and I sprawled face down in the muck in front of everyone. Things got even funnier as several other guys went at the ball, which refused to move more than a foot. Each time it was kicked at, it sent up a bow wave of muck that sprayed over everyone. It was hard to tell which color each team was wearing after that.
Top

one time the ball came to my left foot, and i am not the best when it comes to kicking with my left but we were winning so i thought what the heck. i kick it but i fall in the process, it was a hard fall too. But the funny part was that the ball went into the goal, and it probably would have been considered a beautiful goal had i not fell.
Top

When I was about 8 yrs old I played a lil match with the olders and I got the ball and was free (no goalie) I struck the ball and it lasered the crossbar and hit my head then I fell off! Pure Bad Luck! I'm still wondering how the hell did I kicked so high in such a close distance.
The rules of soccer are very simple, basically it is this: if it moves, kick it. If it doesn’t move, kick it until it does.
Top
Post Reply
27 posts