Striking the ball while it's in the air is called a volley. Start by facing the ball while remaining on your toes. This will allow you to adjust quickly, in small steps. Stay composed and focus on timing the volley. Striking a decent volley depends on good timing, so don't swing before you have aligned yourself properly with the ball!

Most players assume that producing a good, powerful shot depends on striking a particular part of the ball. Actually, the important thing is driving the knee of your kicking leg in the direction of your target and following through. A good follow-through, involves lunging forward and landing on your kicking foot.

Power is the result of proper technique. The leg muscles have an elastic quality and to take advantage of this, you need to wind-up and swing in one, swift motion. Through practice, you will find that power comes from minimizing that short, but critical period of time between contracting and extending the leg.

Striking the ball on the outside will bend your shot. The further to the outside you hit the ball, the more spin it will have. In addition, your upper body can affect the height of the shot. When you lean back during the approach, you'll get more height and vice versa.

When curving the ball, make sure that your supporting foot points slightly to the side of the target. Ideally, you want to approach the ball at the same angle.

Techniques for kicking the ball

The instep drive is the most powerful kick in soccer, used for shooting and sending long passes. Start by planting your supporting foot in line with the ball with toes pointing at the target. Bring your kicking leg back and drive it forward in a single motion. Your ankle should be extended and locked. Strike the ball with your shoelaces and follow through in direction of the target. To keep your shot low, contact the ball slightly above the equator and keep your shoulders over it.

The inside curve is the best technique for placing the ball with precision, commonly used when taking free kicks and sending lofted passed, including crosses. First, position your supporting foot next to the ball with toes aimed slightly to the side of the target. Try to make contact with the inside part of your shoelaces. Striking the ball off center produces spin and will curve your shot. Note that leaning forward or back will affect the height of your shot.

The bicycle kick is a spectacular technique in soccer that is used for shooting and sometimes clearing the ball. Contacting the ball is usually done with the toes or the instep. Generally, this type of move will leave you on the ground, so it's rarely practical to attempt a bicycle kick unless you're both confident and athletic. Remember to extended your arms back to cushion the fall.

The outside curve technique is useful when the ball is positioned on the side of your stronger foot. The toes of your supporting foot should be pointing at the target or slightly to the side. Try to contact the ball with the outside part of your shoelaces and follow-through to bend the shot.

The Rabona is a cunning technique used to shoot or pass the ball. Typically, this type of kick works best in combination with dribbling in order to confuse and mislead your opponents. Note that the ball needs to be on the outside of your supporting foot. Striking the ball is usually done with the toes.

Volleying is a kicking technique used while the ball is up in the air. First, make small adjustments in your footing so that you are well-aligned and balanced before swinging at the ball. Producing a good volley is largely determined by your timing. Therefore, focus on when to swing rather than where to contact the ball.

Drills for kicking the ball

Keep in mind that it takes many hours of repetition to master kicking the ball. Moreover, it's crucial to practice with as few interruption as possible. That's why it's particularly helpful is to have a training partner or to find a wall suitable for practice. Send the ball against the wall or your partner and strike it again as it comes back. There are many variations to this drill for example turning before you shoot or kicking the ball right away without a setup touch.

One of the most common obstacles with heading the ball is overcoming your natural fear of getting hit on the head by a flying object. Remember that you are trying to strike the ball so don't just let it hit you. Before jumping for a header, take a few small steps to adjust to the ball. It's difficult to produce a good header when you are not well aligned with the ball. The power of a header does not come from your neck. You have to arch your body back and lunge forward to strike the ball. The ball should be struck with the top part of the forehead. Young players tend to close their eyes when heading the ball. By doing so, you can't see where the ball is and you may injure yourself or somebody else. Lock your eyes on the part of the ball that you want to strike and keep them open until contact.

Techniques for heading the ball

To head the ball with a good amount of power you'll need to arch your body back and swing your head forward. Keep your shoulders leveled and perpendicular to your aim. Contact should be made with the center of the forehead. Aligning yourself with the ball before you jump is critical. This technique is used in both defense and attack, although when trying to score the ball is usually directed down.

With this technique, you propel your entire body in the path of the ball. Your arms should be stretched forward for protection on landing. The diving header can be used by defenders to clear the ball and occasionally on the attack.

When executing the glancing header, you turn your head and shoulders in direction of your aim. This motion redirects the oncoming ball. The glancing header is used for directing crosses in the goal.

The flick-on header is a technique where you are actually making contact with the back of your head. This technique is often used by midfielders who have their back towards the opponent's goal.

When you're close to the goalkeeper, the focus should be on placement. Good placement requires composure and knowing the position of the goalkeeper. You can find where he is by looking up before shooting or better yet, before even receiving the ball. Powerful shots are only necessary when you are far away from the goal. It's hard to beat a decent goalkeeper who is well positioned and ready. This is why it's important to shoot unexpectedly, without telegraphing your shots.

Usually, attackers don't have a lot time to choose how or where to place their shot. The most important factor to consider is your own skills in terms of the situation. For example, if volleying isn't one of your strong suits, your odds of scoring from a cross would improve by setting up the ball. Decide how and where to shoot ahead of time so that you don't hesitate when the opportunity is available. 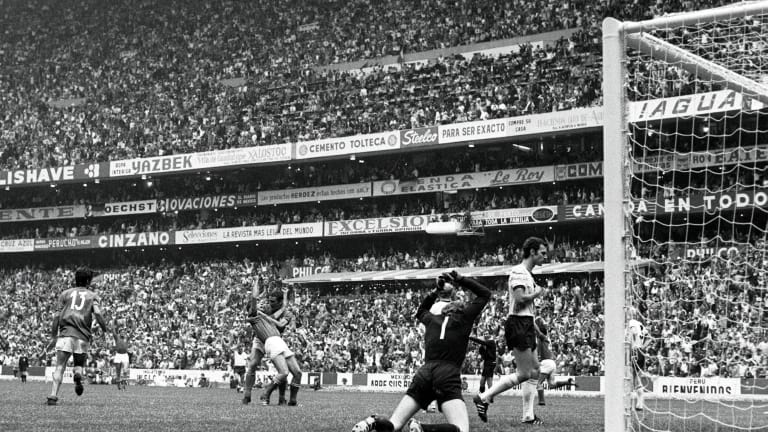 During breakaways, an attacker is facing the goalkeeper in a 1v1 challenge. When you are that close to the keeper, there's no need to shoot very hard. A well placed ball in the corner or a sudden touch can beat almost any keeper. If you're really confident, you can even try a nutmeg or a chip. Just make sure to keep it simple. Hesitating or trying something too complicated are the main reasons why most breakaways are wasted.

When trying to score from long range, your first priority should be keeping the shot low. If your shot is above the crossbar, the play is over and there is no possibility for a deflection. Weather conditions like wind and rain can sometimes convert long-ranged shots into a keeper's nightmare so use the weather to your advantage.

Near corner vs far corner

Shots that do not end in the back of the net, can often result in a scoring opportunity for somebody else on your team. Let's say that you're approaching the goal from the side and you have a teammate in the penalty box. Shooting in the near corner may force the keeper to punch the ball out-of-bounds. If the shot is directed in the far corner, the goalkeeper will have to deflect the ball infield, in the direction of your teammate. 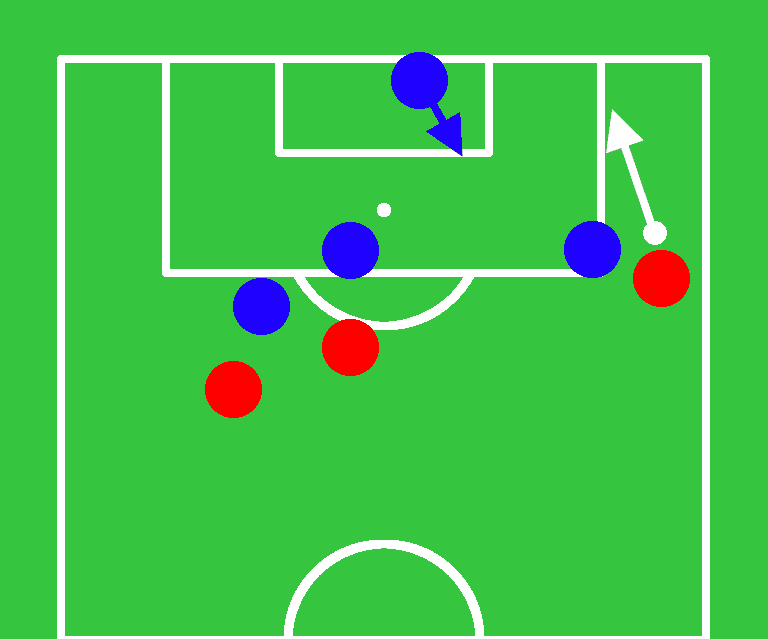 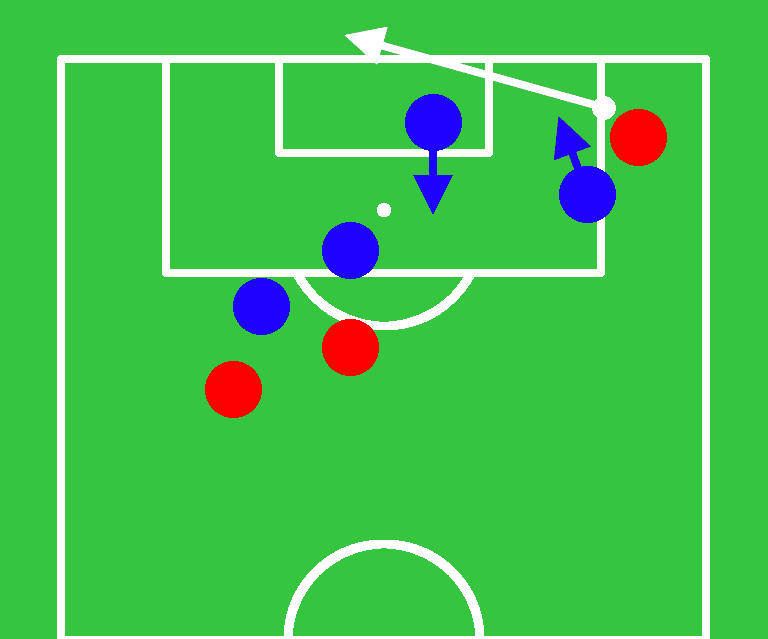 When approaching your opponent's goal from the flank, it is often assumed that you are going to cross the ball. The keeper's natural reaction is to step forward off his line, expecting to catch or clear your potential cross. At this point, he'll be vulnerable for a chip or a far-post shot. Many top-level goalkeepers have made similar mistakes.

Finishing crosses is mostly about adjusting to the cross, rather than trying to hit the ball really hard. Make sure your body is leaning forward on low or bouncing crosses. On high crosses, the best way to beat the keeper is by directing the ball downward. Remember, placement and proper contact are more important than power when the goal is close by.