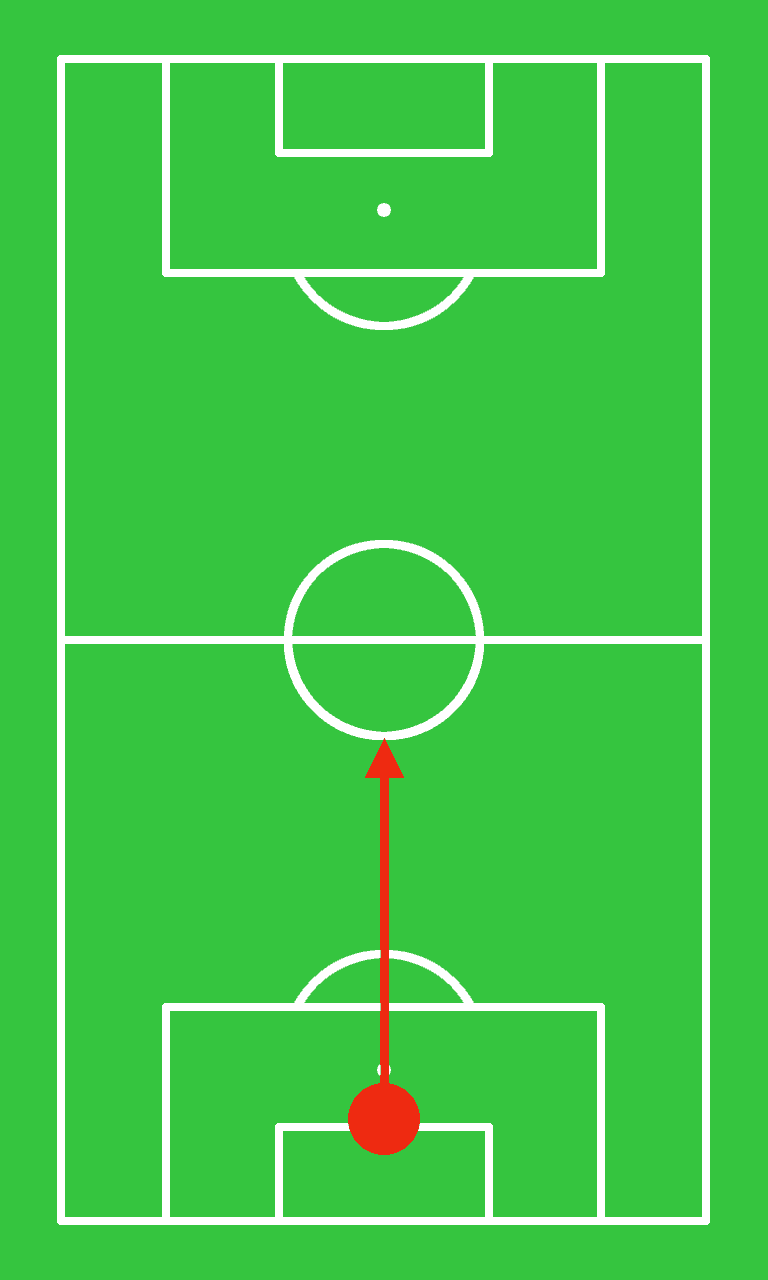 The goalkeeper is the only player who is allowed to touch the ball with his hands. Also, he is usually the only player with a full overview of the pitch. Because of this unique advantage, it is the keeper's responsibility to direct and instruct his teammates. He must be communicative and should possess leadership qualities. 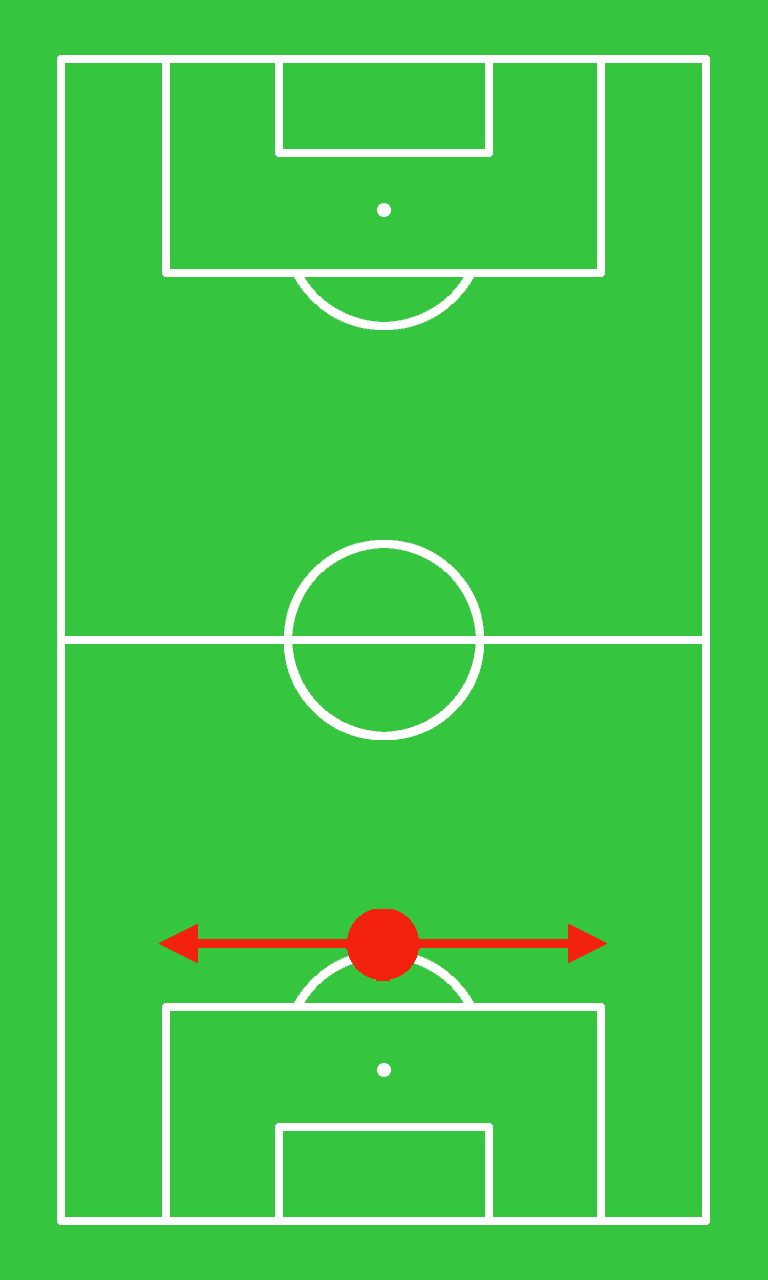 The sweeper is always "the last player" in defense, roaming laterally behind the other defenders. Yet, he must not sway too far toward the sidelines. The sweeper's job is to anticipate and close down gaps left by other defenders. Since the sweeper never marks opposing attackers, he can occasionally move forward, for example during set plays or corner kicks. Overall, the sweeper needs to be experienced, perceptive and should handle the ball with confidence. The German legend Franz Beckenbauer popularized the sweeper position in the 1970's. 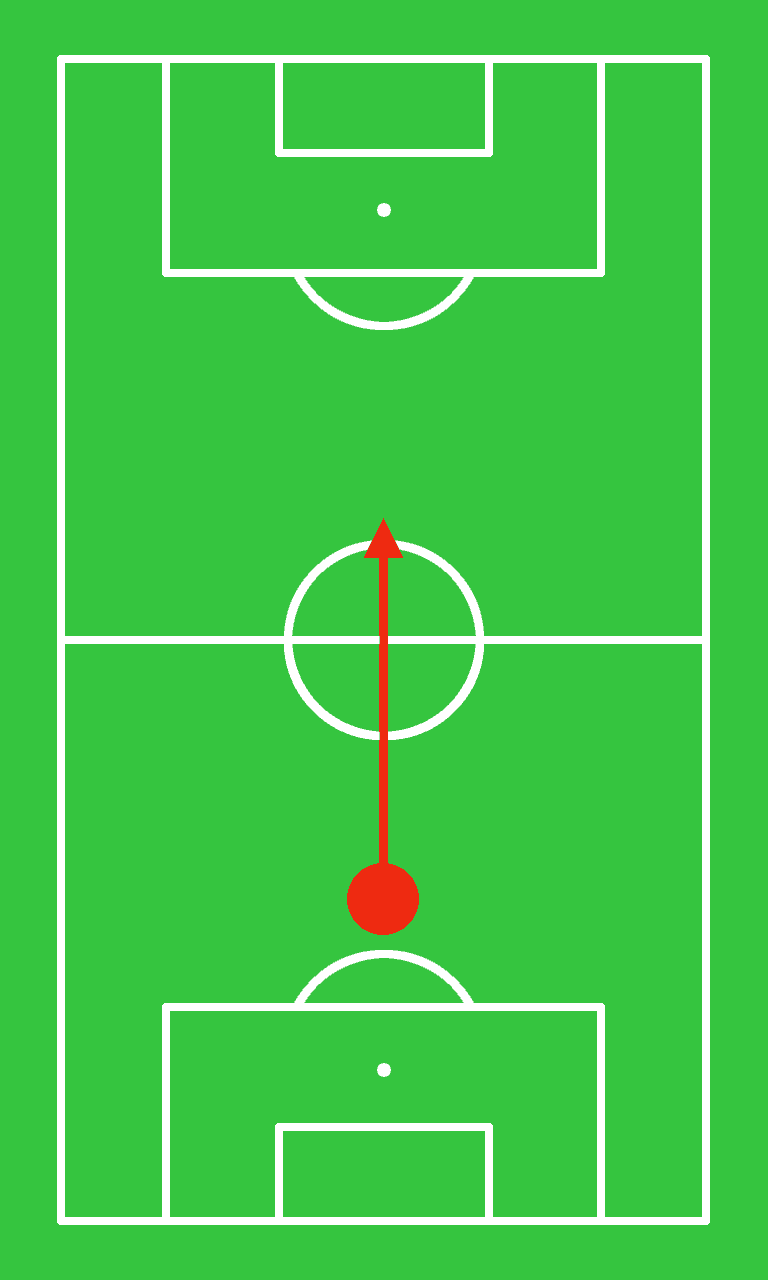 The stopper plays in the center of the defense. The job of the stopper is to mark attackers and fight with them for the ball. This is the most defensively-oriented position in soccer. Stoppers have to remain in the backline nearly at all times. Opponents often try to cross or force the ball through the center of the defense. Therefore, the stopper position requires aggressiveness, strength, good heading ability and courageousness. Some teams may use two stoppers in conjunction. 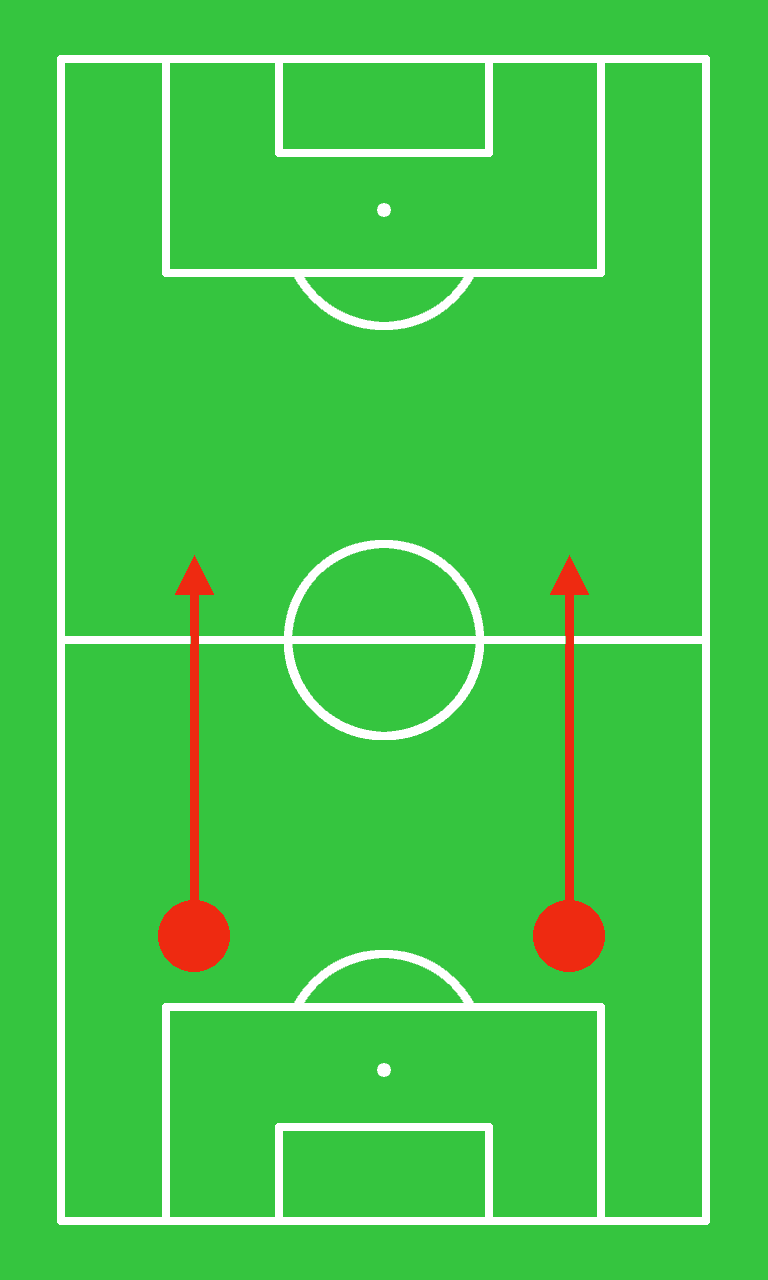 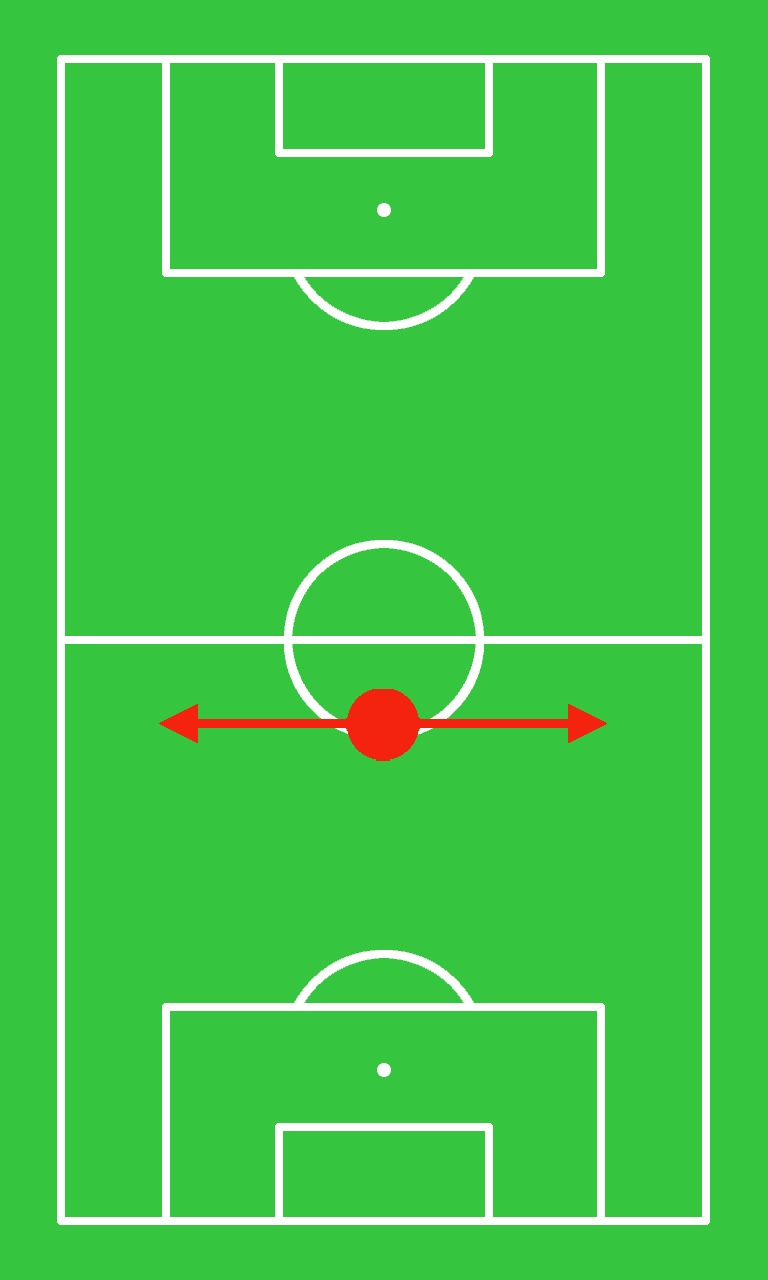 The defensive midfielder is the backbone of the team. He roams laterally from sideline to sideline and pressures the ball. The defensive midfielder steps in when one of his teammates loses the ball in the middle of the field. In attacks, he should make supporting runs and provide back passing options, especially when the ball is near the sideline. Brazil's former captain Dungha is a good example of a defensive midfielder. He led his team to the World Cup finals in both 1994 and 1998. Claude Makelele is another more recent example. Both Makelele and Dungha are aggressive tacklers, they know how to shield the ball and are always well positioned. 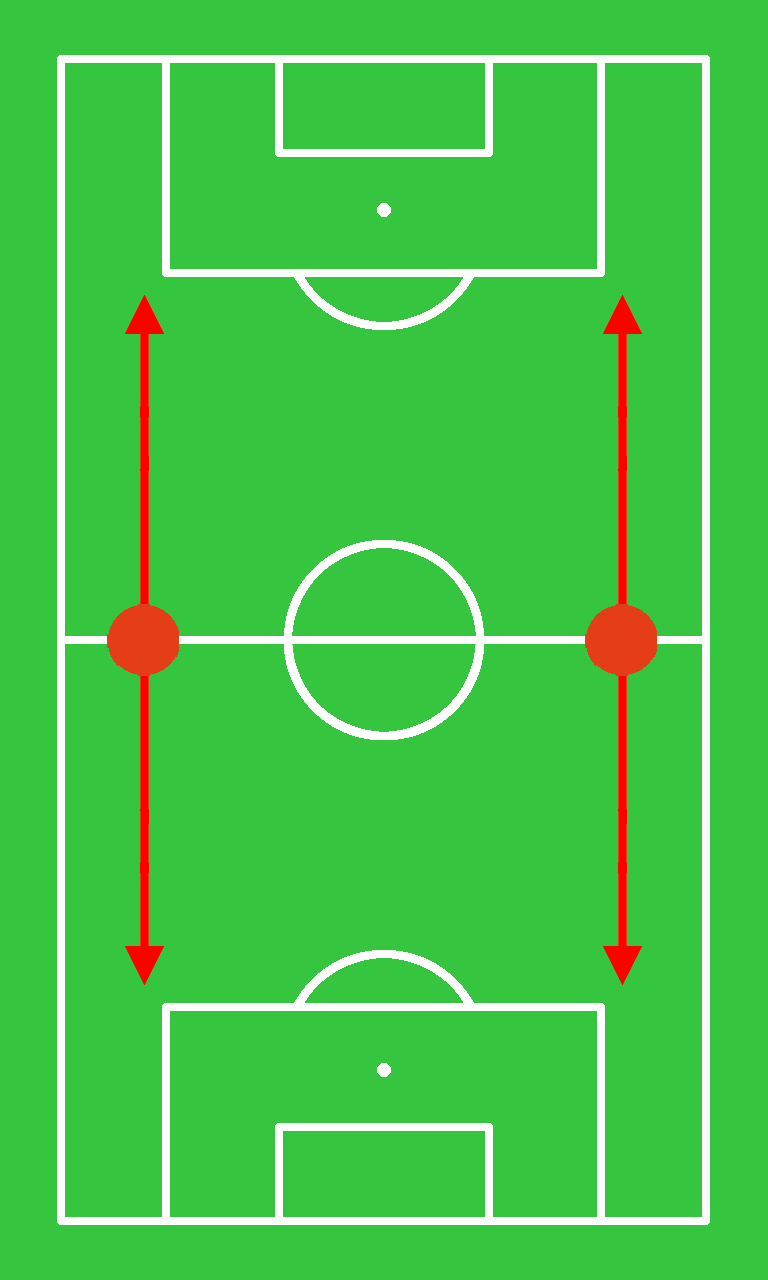 The outside midfielder has important responsibilities in both defense and attacks. In defense, he usually marks opponents on the flank. If there are no opponents around, he may pinch in towards the middle while remaining in line with the ball. In attack, the outside midfielder must stay wide. By remaining near the sideline, he opens up the game especially during buildup. The outside midfielder should be able to dribble down the flank without losing possession. Besides being fit and active he should have good 1v1 skills. The term "winger" has changed over the years and nowadays outside midfielders are often called wingers. Traditionally, wingers are strictly attacking players who stay wide, dribble the ball forward and serve in crosses. 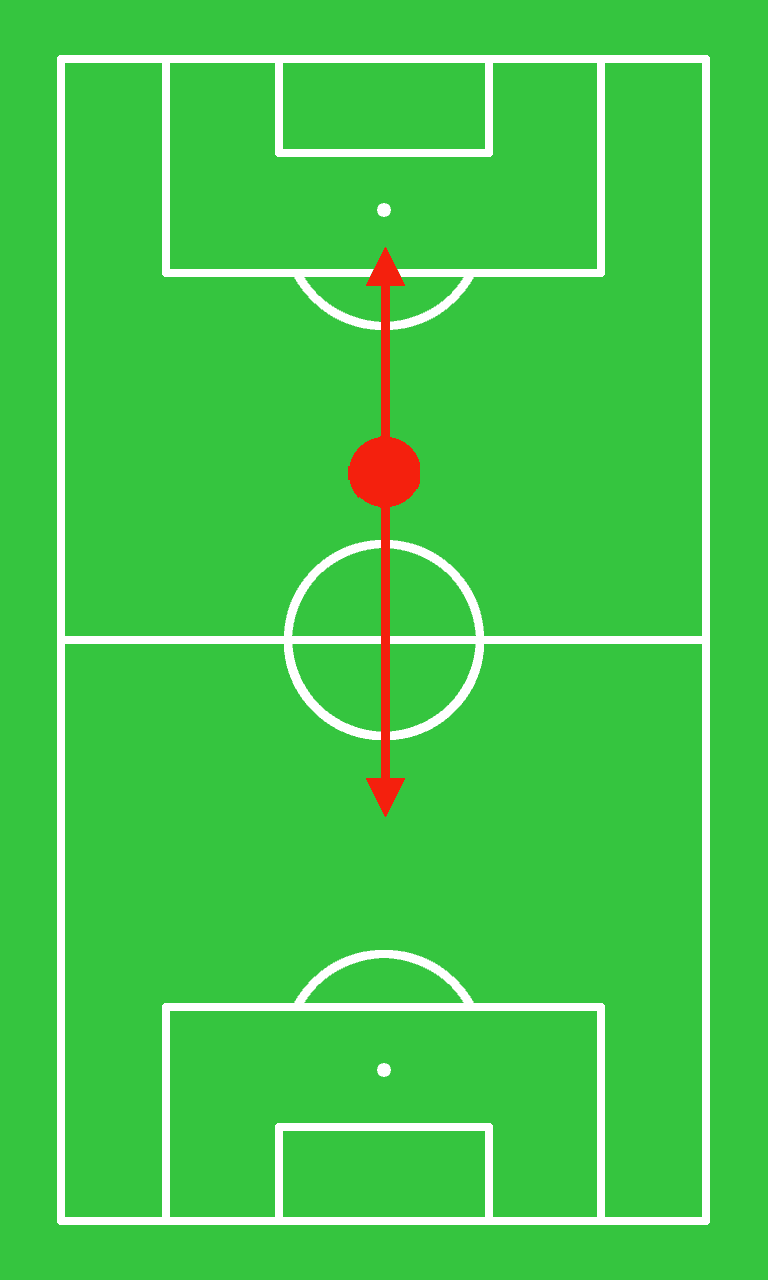 Center midfielders are usually the most skillful players in the team. A good center midfielder is always scanning the field for passing options and opportunities for plays. During attacks, he must initiate supporting runs by moving towards the ball. On defense, the center midfielder drops back and pressures the ball. Overall, the position requires skill, stamina as well as good tactical understanding. Center midfielders who are very active in directing attacks are often given the title "playmakers". Zinedine Zidane of France and Carlos Valderrama of Columbia are great examples. 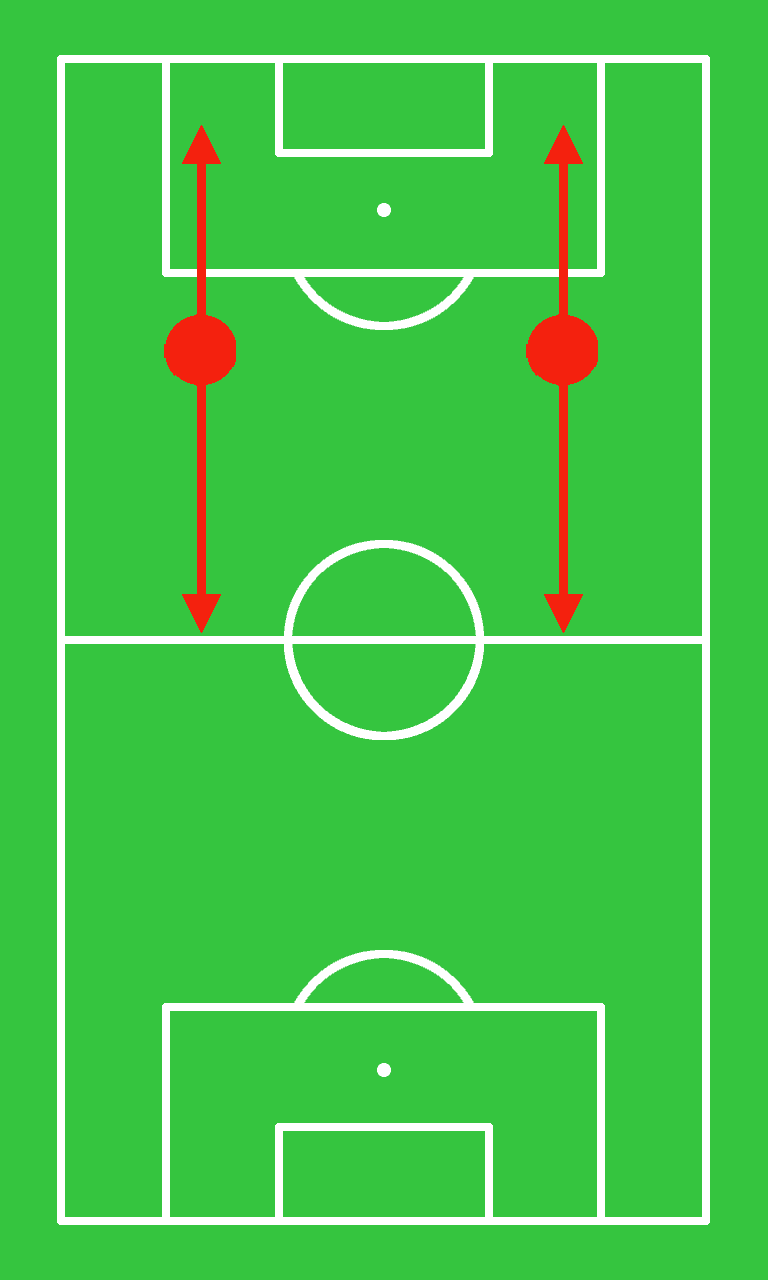 In addition to scoring, forwards are also expected to run back and support the midfield. This can best be observed in top-level games, where the forwards often play with their backs turned to the goal. When a team is playing with two forwards, they must both move in conjunction. If the ball is on the left flank for example, they must shift so that one of them is in the center and the other one is near the sideline. By keeping the distance between each other constant, forwards can effectively pull apart the opposing defense. Forwards need to handle the ball quickly while remaining composed, since they usually work under a lot of pressure. 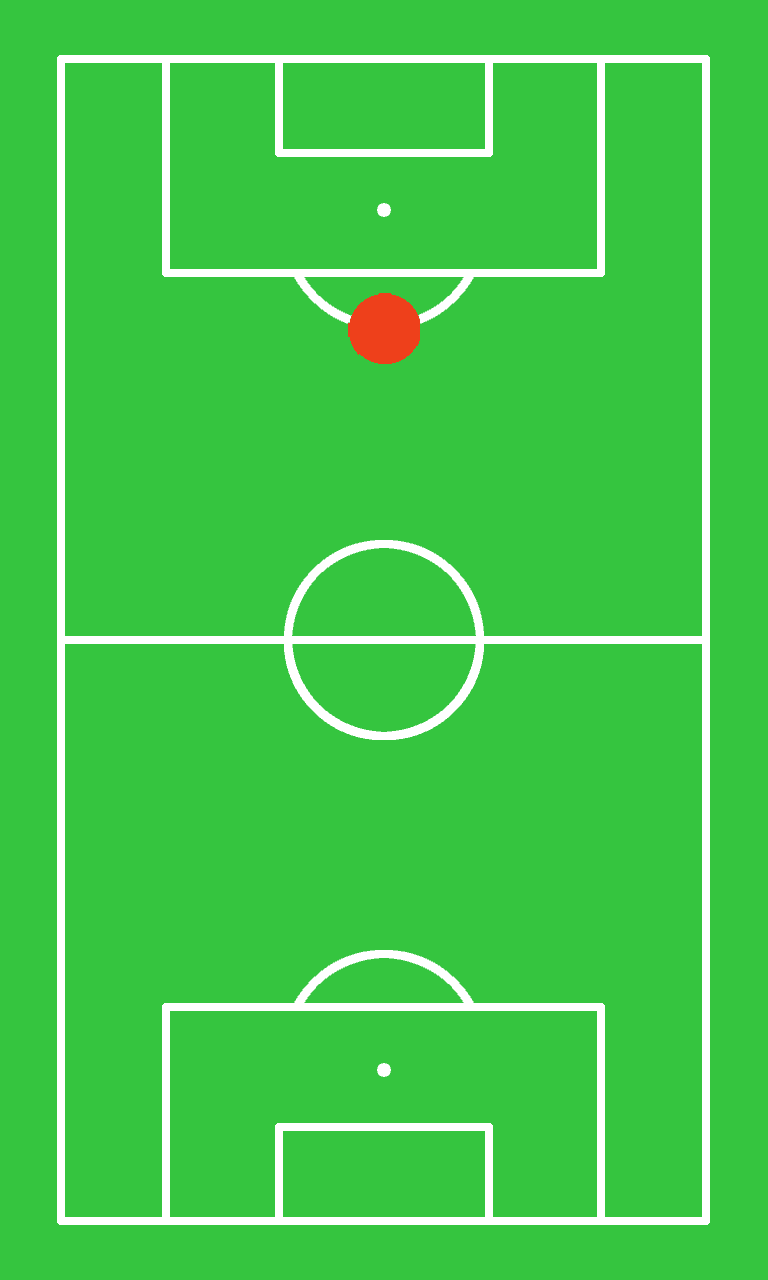 Unlike other attackers, the striker doesn’t shift to the sides as much, but remains in front of the opponent's goal. When outnumbered, the striker should shield and play the ball back. The main ability of the striker is usually his strength and heading. Popular strikers in the game include Jan Koller, Carsten Jancker, Christian Vieri and Andriy Shevchenko. All of them are powerful, good in the air and it's nearly impossible to push them off the ball. 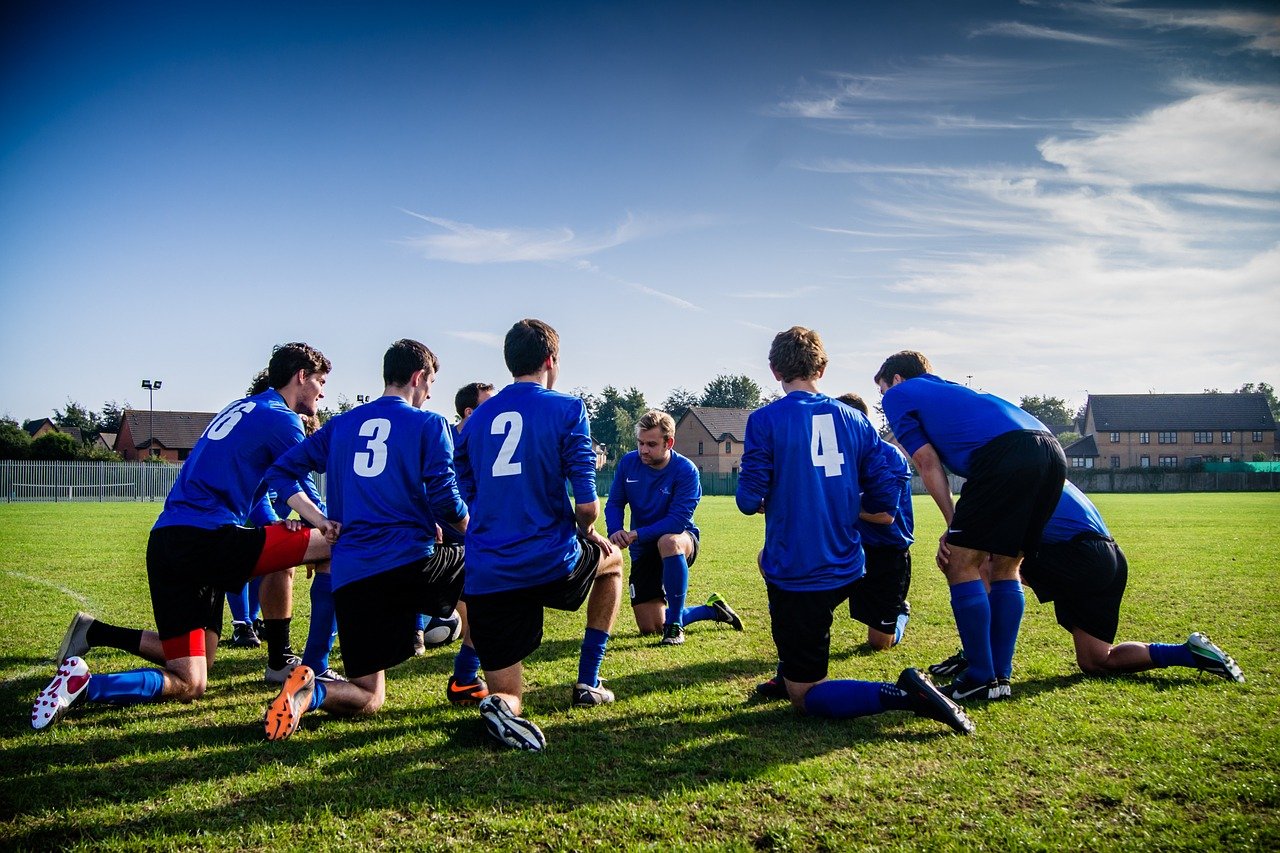 Ideally, you want to try playing in different positions and see where you fit best. Just remember that there may be a difference between your favorite position and the one where you are most effective.

What makes a good defender

Top level defenders know how to read the game and are always one step ahead of the opposition. Watch any good defender and you will see that he anticipates the movement of the person he is marking. Even if the attacker is faster, they close him down and beat him to the ball purely due to their good tactical anticipation.
Good defending is not just about how aggressively you tackle. You have to be able to recognize different dribbling moves, tricks and turns. As you gain more experience you will learn to “get in the head” of your opponent and his moves will never surprise you. One of the biggest mistakes that young players commit is lacking patience. Never charge in at an opponent unless you know that you will win the ball.
Quickness and strength are probably the most important abilities you need in defense. You have to be agile to mark and jockey opponents. Strength is important in winning 50-50 challenges and when shielding the ball.

What makes a good midfielder

Midfielders should be able to keep possession of the ball by dribbling. This is especially important for outside midfielders because they often need to carry the ball up the sideline.
Midfielders have to be good at both finding where to pass and actually sending the ball there. As a midfielder, you have to be both tactically aware and technically gifted. Also, you need to be able to remain composed while playing under pressure.
Playing as a midfielder is physically demanding and requires covering a lot of ground. Most midfielders have to help the defense, support the attackers and even make forward runs themselves. Without good stamina, you're going to be watching a lot of plays from the side.

What makes a good attacker

Some attackers can score simply because they know how to be in the right place at the right time. For example, at the moment when a shot is taken the clever attacker would immediately run to the goalkeeper in the event he mishandles ball.
Generally, attackers have to play while being marked most of the time. Some may use their speed, others will shield the ball or perform tricks. Dealing with pressure from defenders depends on your personal strengths and abilities.
The most important ability for an attacker is his finishing touch. Having a powerful long-range shot means little if you need to stop and trap the ball first. An effective attacker has to be able to shoot and score in mid-stride.

It is important to point out that there is no ideal formation. From a coaching perspective, "the best" formation is the one that suits the players in your squad. 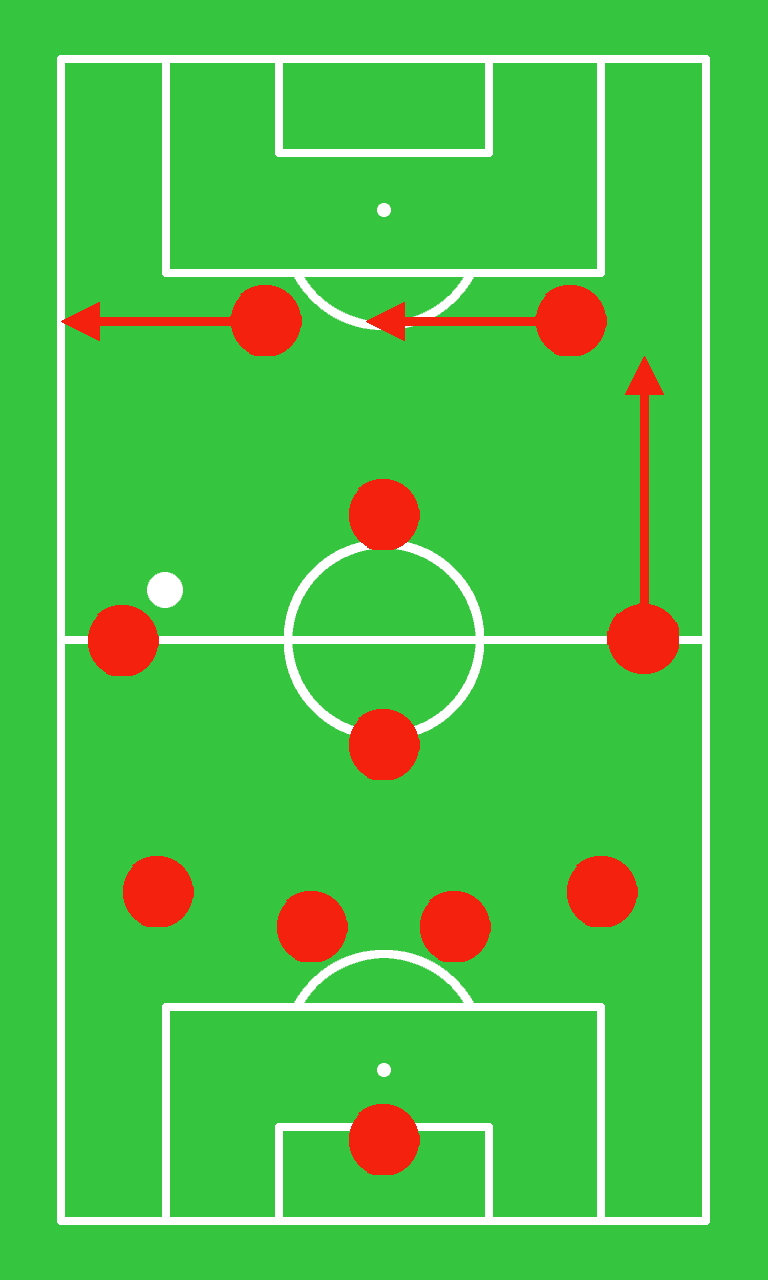 This is a very popular and versatile formation. The main strength of the 4-4-2 is the defense-midfield link. The weakness is the two attackers who have to be constantly supported by the midfield. Two attackers are often not enough to stretch apart the opposing defense which may consist of four players or more. To accommodate, you need to get your outside midfielders running up the sideline. For example, when your team is building an attack on the left flank, the midfielder on the right flank has to run up toward the far post. 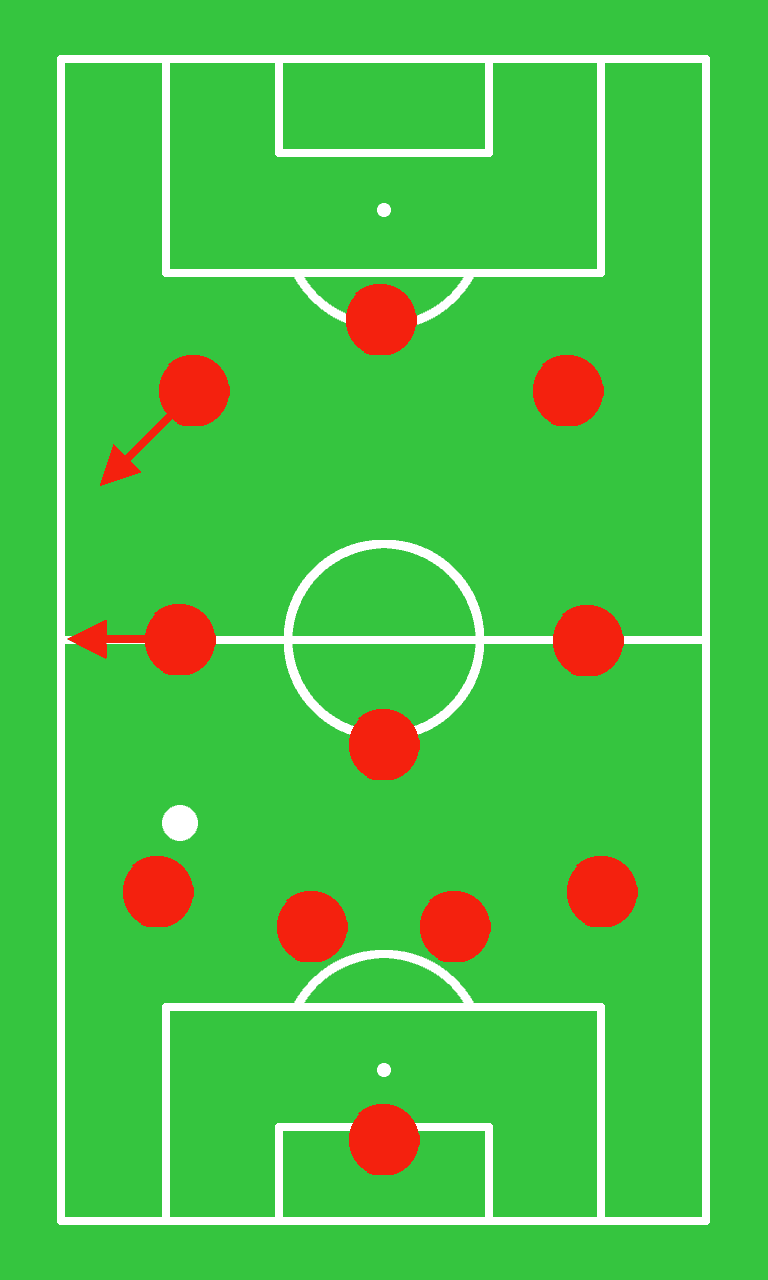 Compared to other formations, the 4-3-3 is really well suited for young players. The outside attackers need to drop back and help during the build-up. It's very important to keep the outside attackers near the sideline. Younger players tend to force the ball through the middle of the field. You have to teach them to build up attacks by playing the ball wide and forward, not directly through the center of the field. 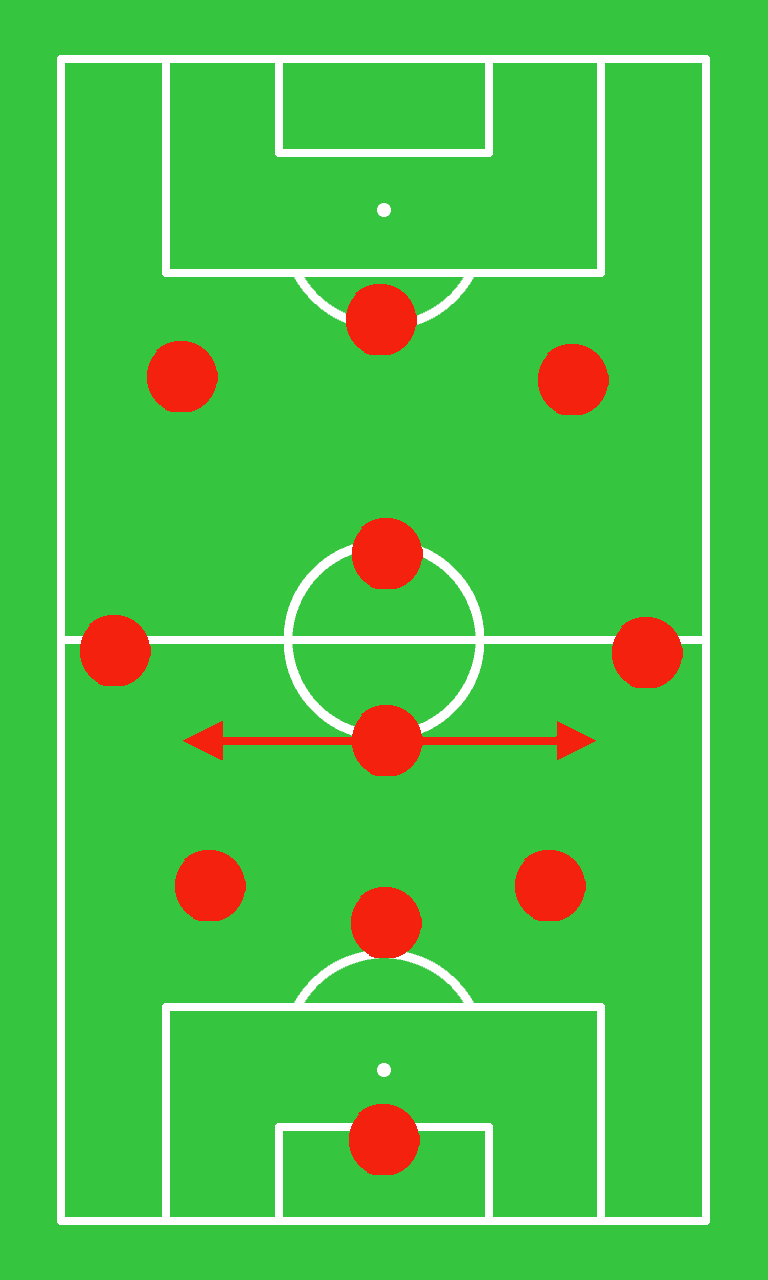 The 3-4-3 is considered an attacking soccer formation. With this formation, one striker always needs to remain on the tip of the attack, so he should be able to hold his ground. In defense, the three fullbacks need to work together as a unit. At least one midfielder needs to drop back and play in front of the defensive line. His job is to pressure the ball so that the defense is never caught flat. 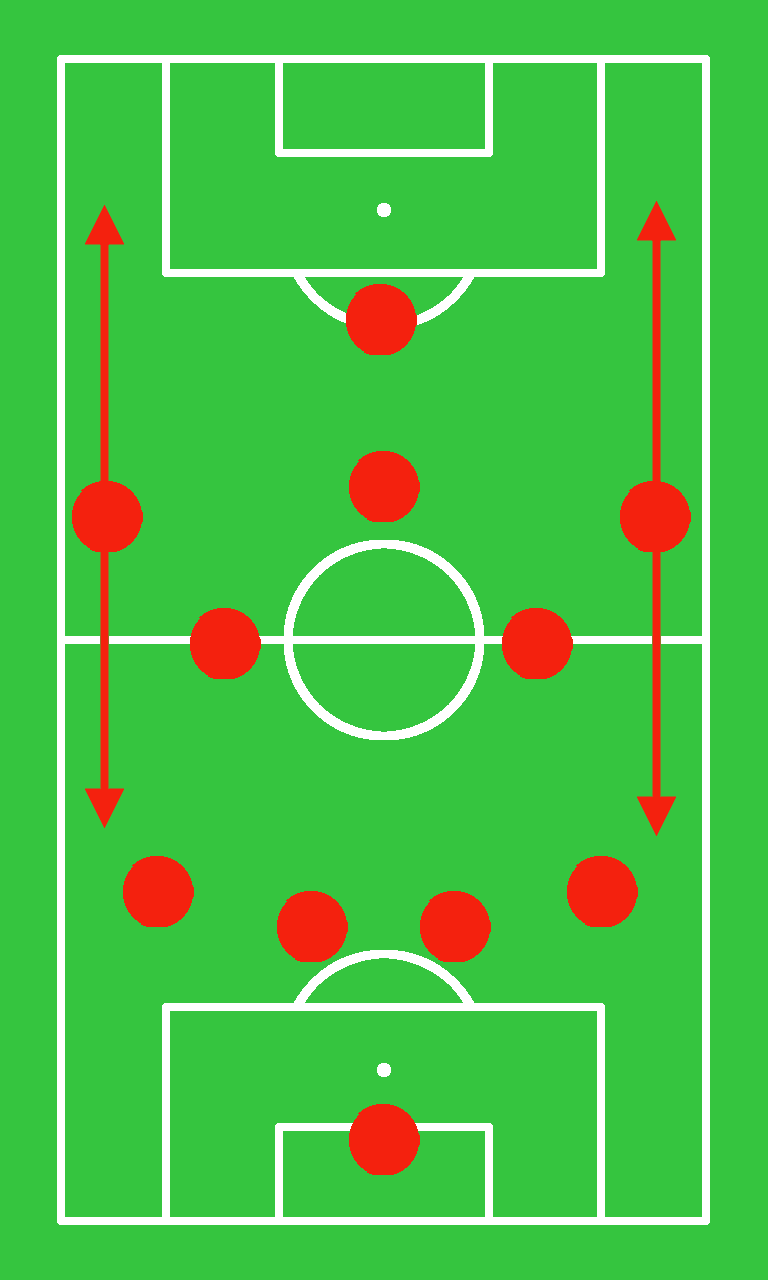 The 4-5-1 is considered a defensive formation since it crowds the midfield and slows down the opposition. Some extra effort is required to ensure that the lone striker does not become isolated. The 4-5-1 formation relies on flank attacks and the two wingers are expected to run up the sideline and serve crosses in the box. 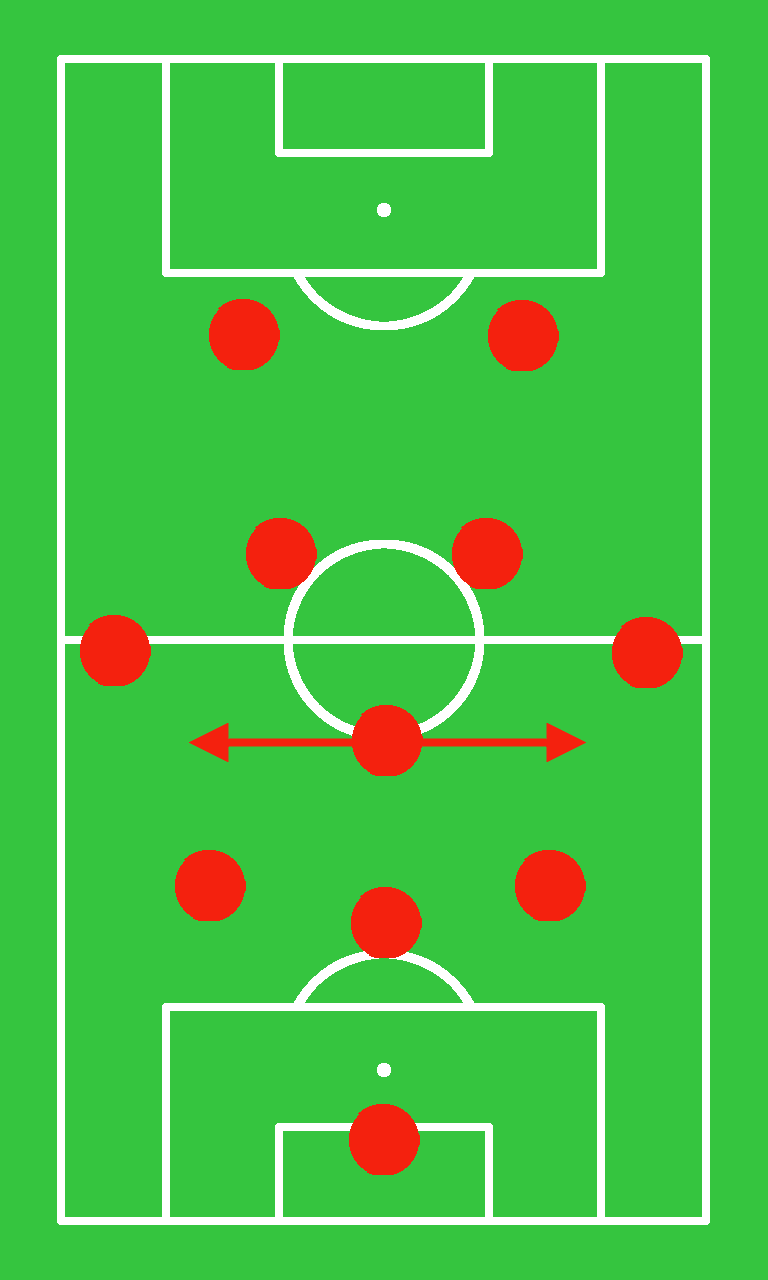 The 3-5-2 is a relatively modern soccer formation that developed in response to the popular 4-4-2. The 3-5-2 formation abandons the fourth defender who often has nobody to mark while the opposition is playing with only two attackers.