Passing to the feet of a teammate is useful in close quarters. When your teammate is marked, the ball should be directed to his foot that is farther away from the marker. When the pass is slow, the receiving player needs to check back to the ball, especially if he is being marked.

Passing the ball into space increases the speed of the game. If you see a teammate running, always look for open space in front of him where the ball can be played.

The wall pass is a passing combination between two players. One player passes to his teammate who returns the ball with a single touch to the space in front of the first player. The first player should start running into space immediately, before his teammate has even received the pass. A lot of opportunities for the wall pass happen on the flanks as the ball is played inside and out.

Techniques for passing the ball

Push pass (inside of the foot)

The push pass is the most basic and effective way of passing the ball to a teammate. When executed properly, the ball will roll smoothly rather than bounce or skip along the ground. Therefore, the pass will be easy for your teammate to receive and control. Start by planting your supporting foot about 10-15 cm (4-5 inches) to the side of the ball with toes pointed in the direction of your teammate. With your ankle locked at 90 degrees, contact the ball just above the equator using the arch of your foot.

Outside of the foot

Skillful midfielders use the outside of the foot to serve quick and sudden passes. This is one of the few techniques where you are sending the ball perpendicular to the direction you are facing, so the pass is unexpected and difficult to prevent by opponents. Typically, you want to contact the top part of the ball with the outside of your shoelaces, so that the pass remains low.

The chip is most effective for lobbing the ball over your opponent's head. Start by retracting your kicking leg back and swing it forward quickly. Strike the bottom part of ball with the tip of your toes. When done properly, the ball should fly in a high arc and will spin vertically.

The backheel kick has many variations that can work both on the ground or while the ball is up in the air. However, try to use the backheel sparingly and through creativity. Otherwise, it will become a mere statement of showmanship!

Passing the ball under pressure

Before receiving the ball, you should be aware of how much pressure there is on you. If there is more than one defender around, be prepared to lay the ball off right away. Try to decide where you are going to pass in advance, especially when you are marked and don't have time to trap the ball. You should always be looking around for passing options, even when you don't have the ball.

Passing back preserves possession and slows down the game. It is considered a "defensive" pass. Attacking passes on the other hand give your team an offensive advantage. Typically when in your own half, you want to make safe, early passes. In your opponent's half, passing is more about improvisation and moving the ball quickly.

In order to open up the game, the team with possession of the ball always needs to spread out. This forces your opponents to spread out too and improves your team's passing options. Attacking players should never be bunched up together so whenever you see a teammate running into your area, move out of his way to another position.

Checking to the ball

When you check to the ball, you need to move at an angle, preferably toward the sideline. If you run straight toward the ball, especially while being marked, you are limiting the options of your teammate. In addition to providing support for the player with the ball, checking back draws out opposing defenders. 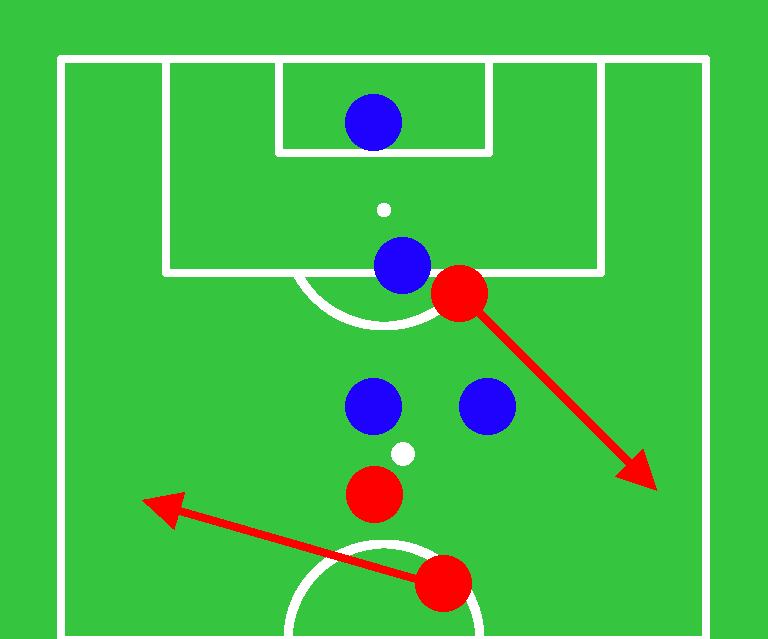 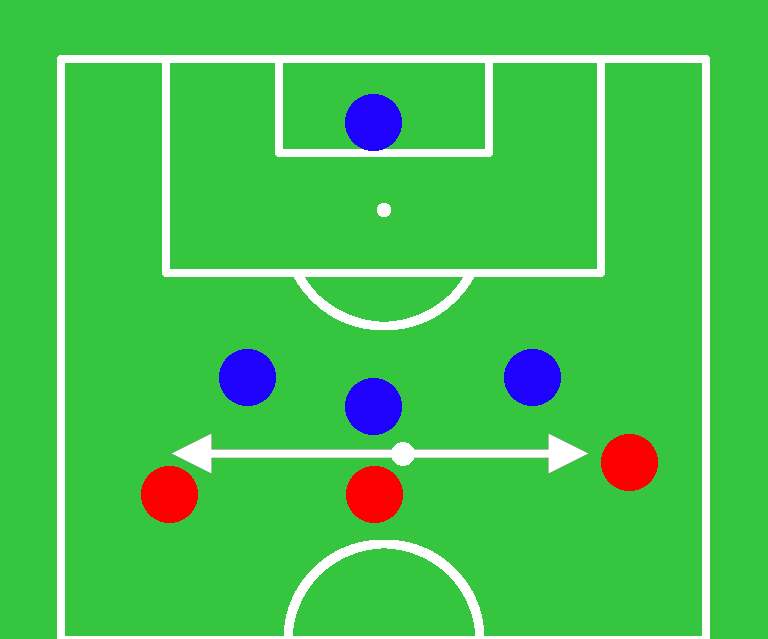 By aligning yourself to the left or right of the player with the ball, you give him the option to make a square pass. Usually, you want to stay a few meters behind the line of the ball so that you can provide help in case your teammate losses possession. 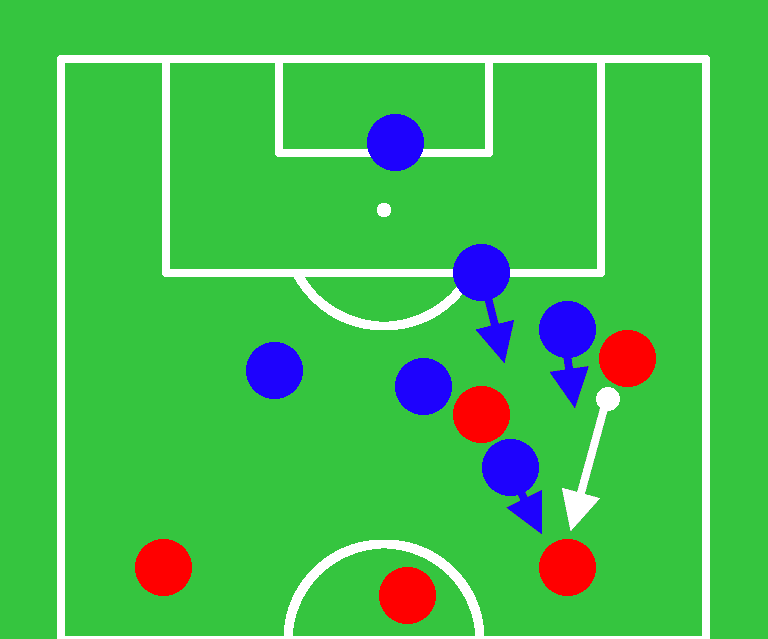 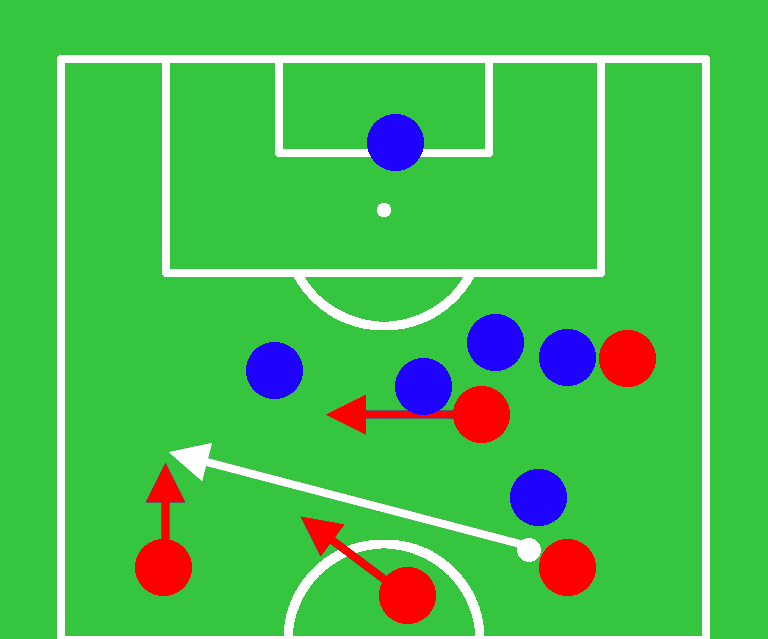 When the ball is near the sideline, the defending team is usually shifted toward the same side of the field. This leaves the opposite flank open to counter attacks. Switching the field quickly can sometimes turn the play from 5v5 to 3v3 which is obviously better for the attackers. Encourage your players to change the field as much as possible, especially when the ball is played back.

The most notable mark of a good attacker is his ability to read plays and create trouble the defense even when he doesn't have the ball. The smart attacker positions himself into areas where the ball could eventually end up either by pass or deflection. Sometimes, the attacker runs simply to distract the defense and to create opportunities for his teammates. 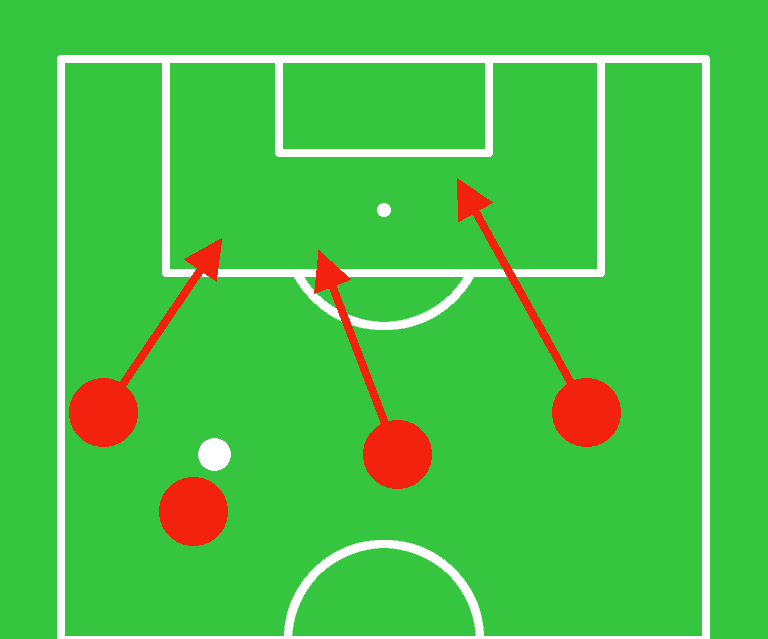 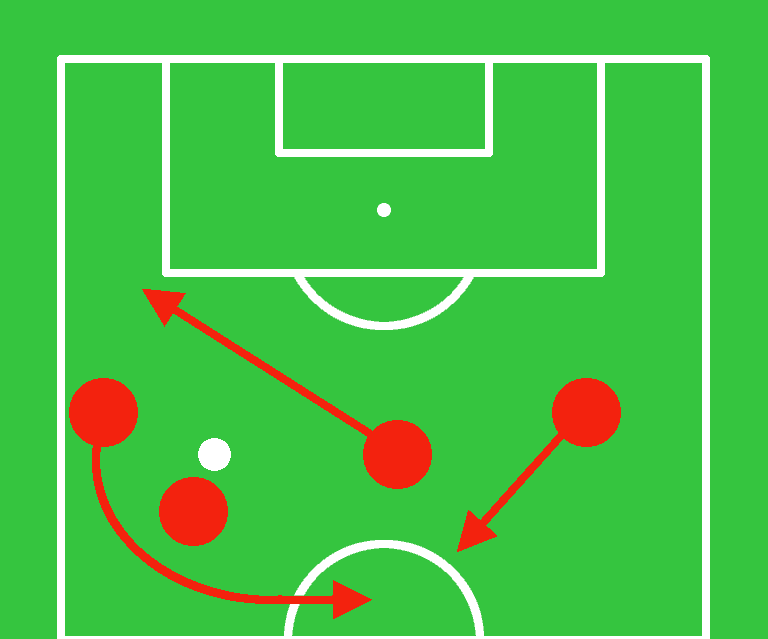 Indirect runs
Making a direct run means going forward into an area where you can shoot and score. For example if the ball is on the flank, an attacker would run in the penalty box to meet the incoming cross. On the other hand, indirect runs are intended to stretch apart the defense. These may include checking back to the ball or running toward the sideline to create space. 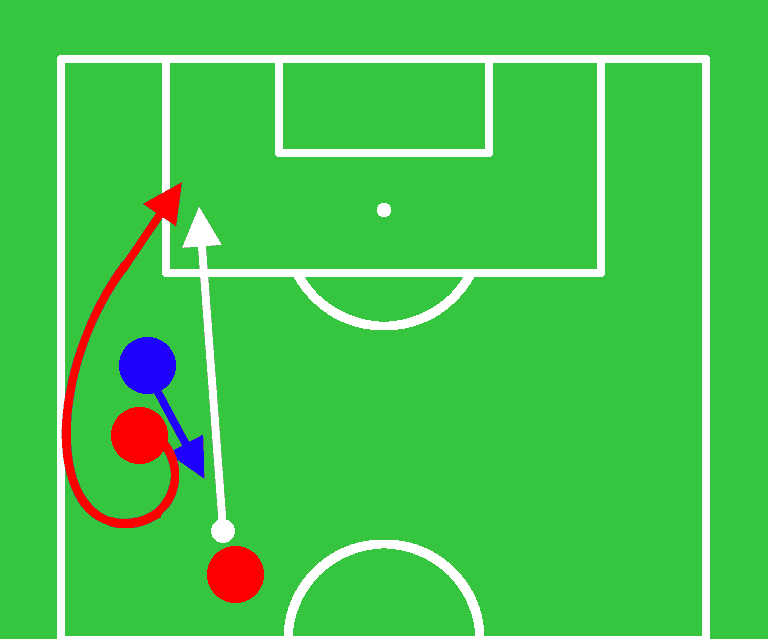 Getting behind your marker for a pass is difficult, especially if he is faster than you. However, the dummy run may give you an extra step over the defender. Start by moving back as if you're checking to the ball. Once your marker follows along, turn around and run behind him. 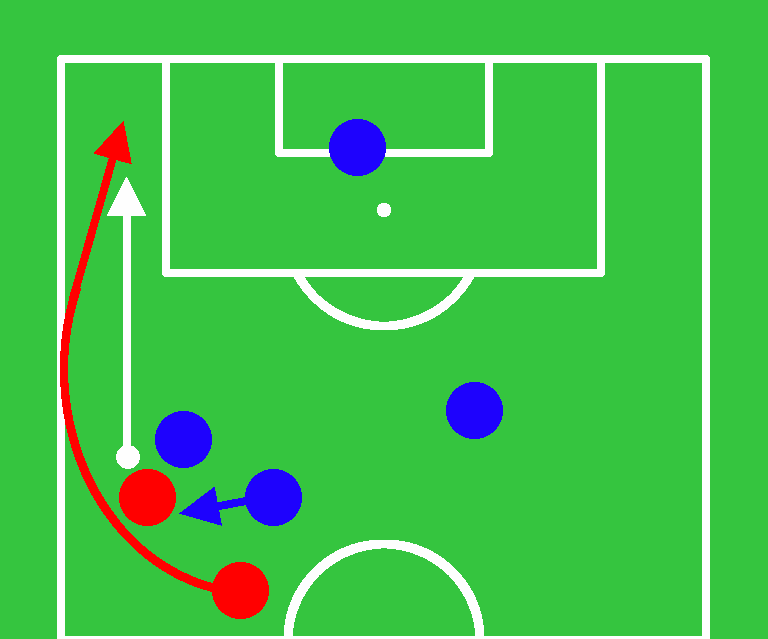 The overlap occurs when the attacker makes a run from behind the person with the ball. It is often used when the player with the ball is near the sideline and there is space in front of him. The overlap can also work across the width of the field.

Running forward vs checking back 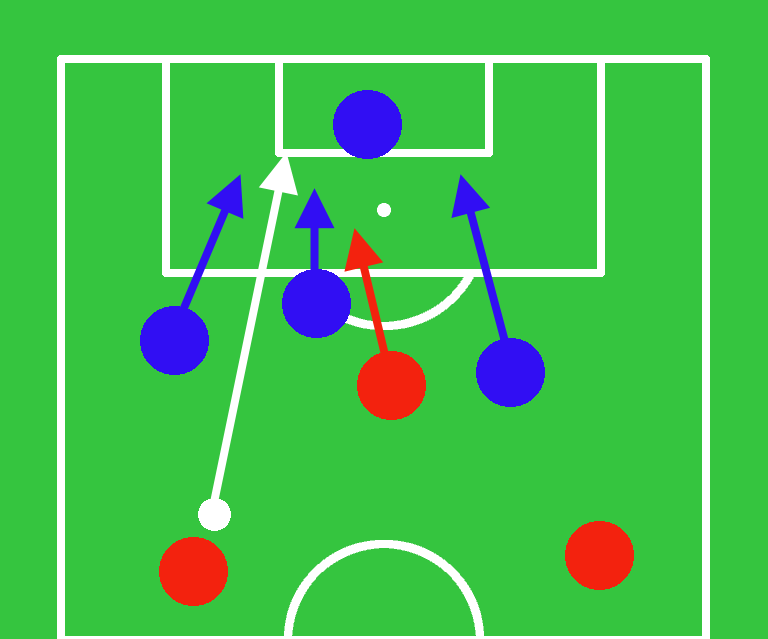 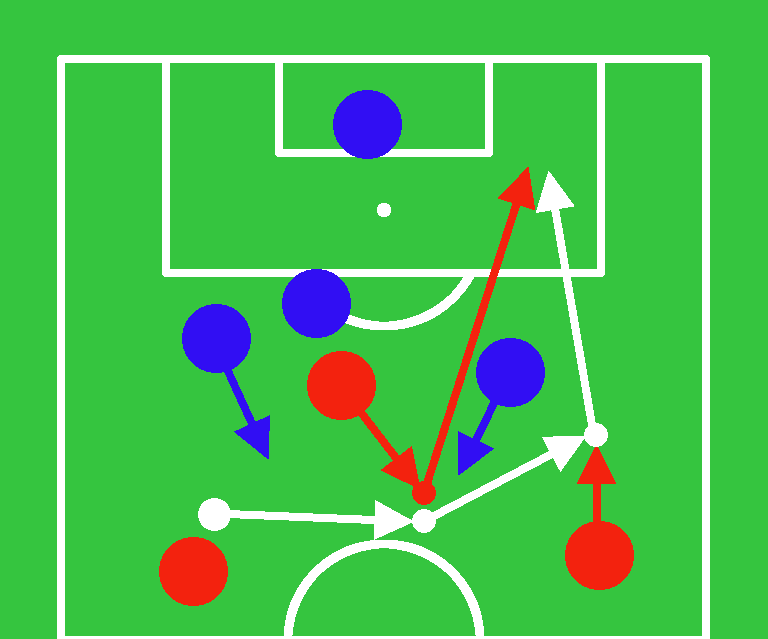 Checking back
When you are playing alone against two or more defenders, it's typically a bad idea to run behind them right away. This will usually result in a footrace that you have bad odds of winning, especially when the goal is far away or the pass is not perfect. It is much better to check to the ball and lay it off back to the midfielders. This will give your teammates the chance to step up and get involved in the attack.