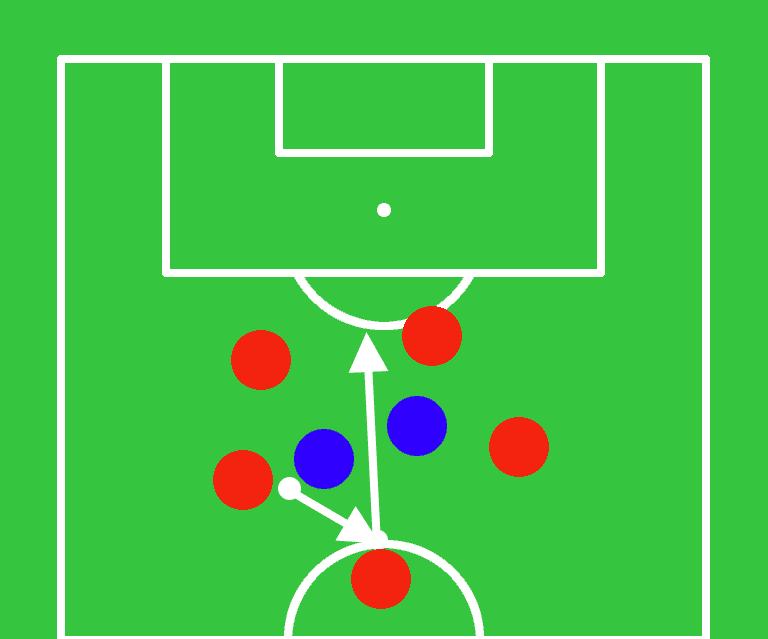 Man in the middle

This is a possesion game often played during warmup. Five attackers arranged in a circle, must keep the ball away from two defenders inside the same circle. If an attacker gives up the ball or kicks it out of bounds he becomes a defender. The defender who forced him to lose possession takes his role. Extra points for the attackers if they manage to play the ball between the two defenders. 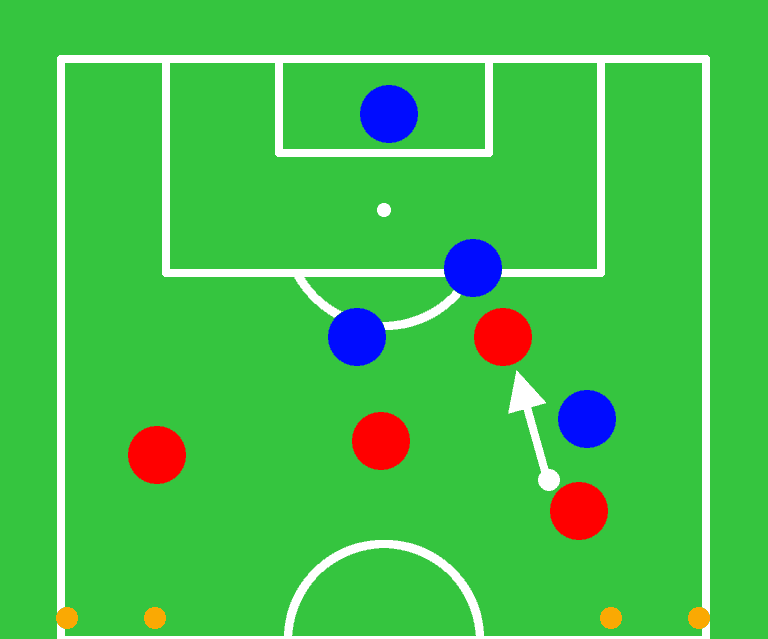 This drill requires at least seven field players plus a goalkeeper. It could work with more players, especially if they are young. The drill is performed on half of a regulation pitch with two additional small goals near each sideline. Play begins with the attackers in possession of the ball, trying to score on the keeper in the big goal. The defenders on the other hand are trying to regain possession and score in either one of the two smaller goals. The goalkeeper works in conjunction with the defense. If he catches the ball, he must quickly initiate a counter attack directed to one of the smaller goals.

This is a warmup drill performed in pairs of two. The two players are facing each other, at a distance of about 10-15 meters. The player without the ball checks to his partner who throws the ball to him with his hands. As an added limitation, the throw must be directed to a specific body part like the chest, head, thighs or feet. After controlling the ball, the first player plays it back to the server and the drill repeats. After a given amount of time, the two players switch roles. 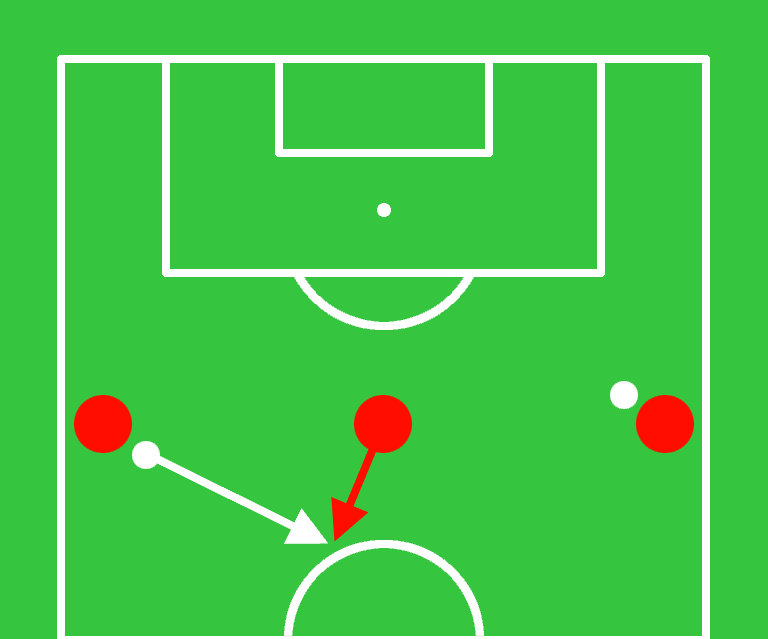 1. The ball is served into space 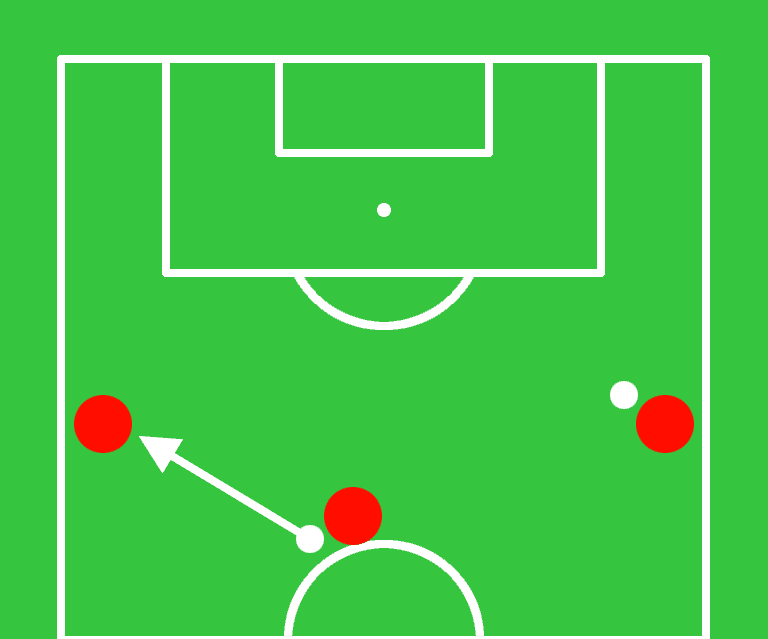 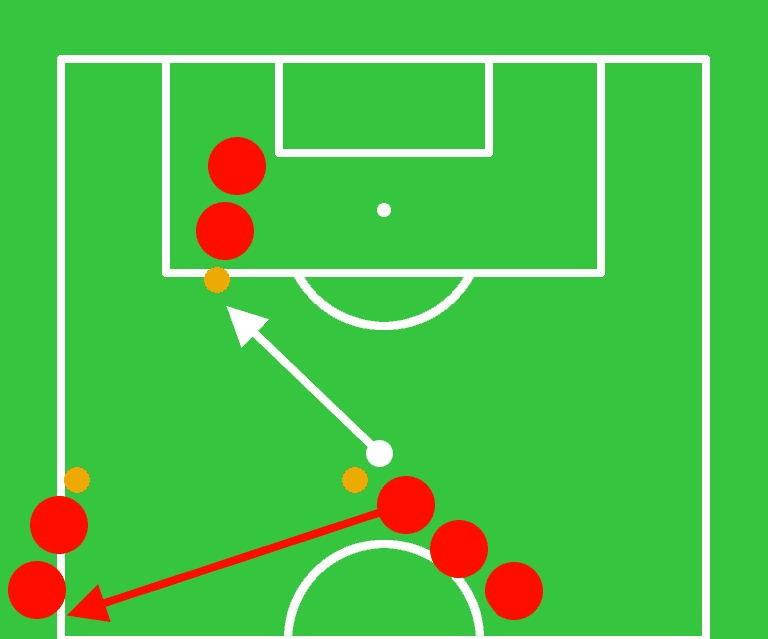 1. The ball is passed from one queue to the next 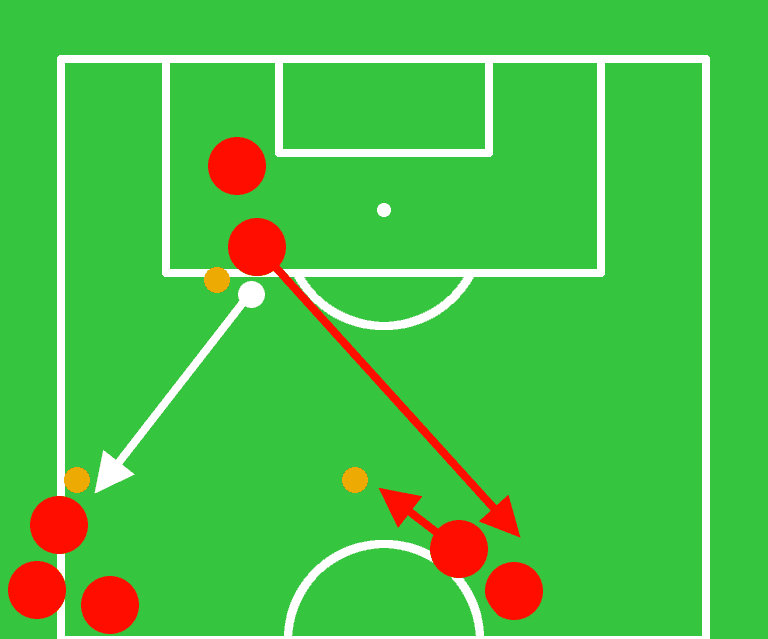 2. The passing player always runs to the opposite queue
This drill requires one ball and six or more players. Setup three cones in the shape of a triangle with queues behind each cone. The player in the front of each queue passes the ball over to the next queue. As soon as he initiates the pass, the passer runs to the back of the opposite queue. The ball is played to the next queue and the rotation is repeated. Players often tend to wait after making a pass, so encourage them to run as soon as they release the ball. 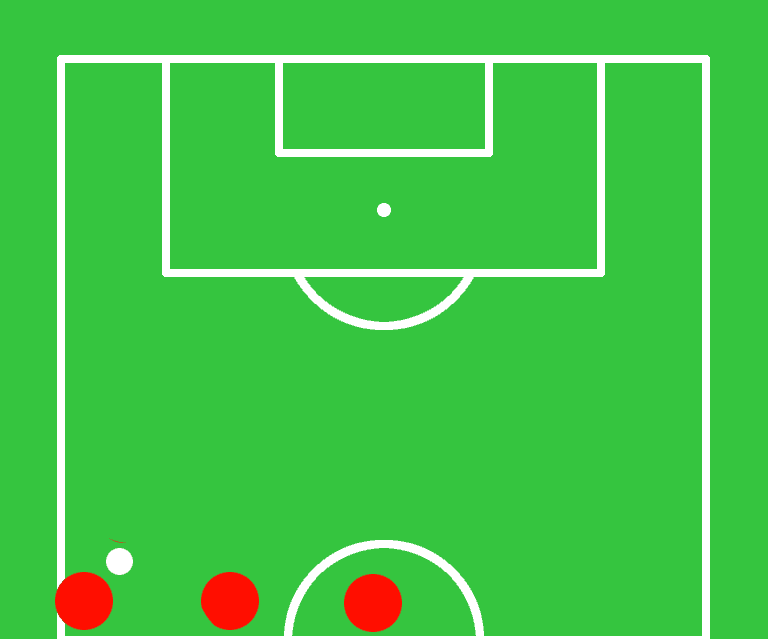 1. The attackers must be spread out with one on the left one on the right and one in the center 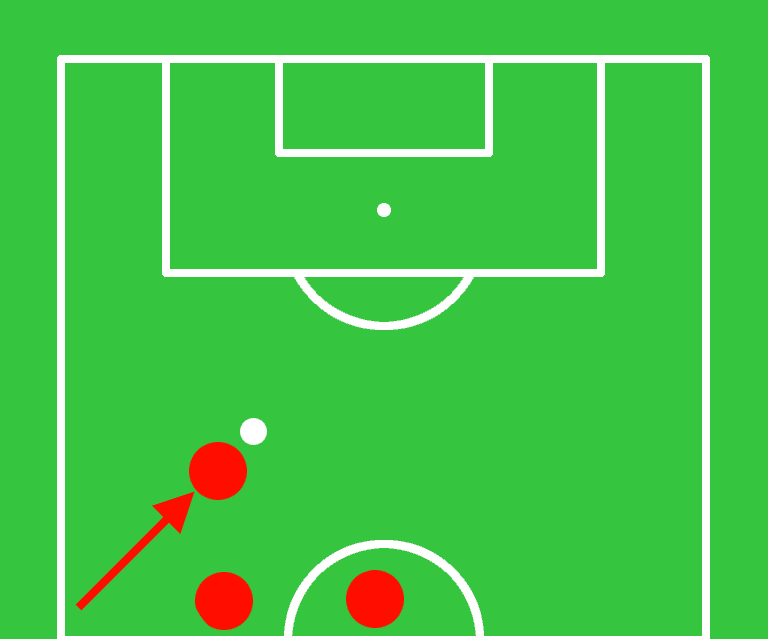 2. The ball is dribbled from the outside to the middle 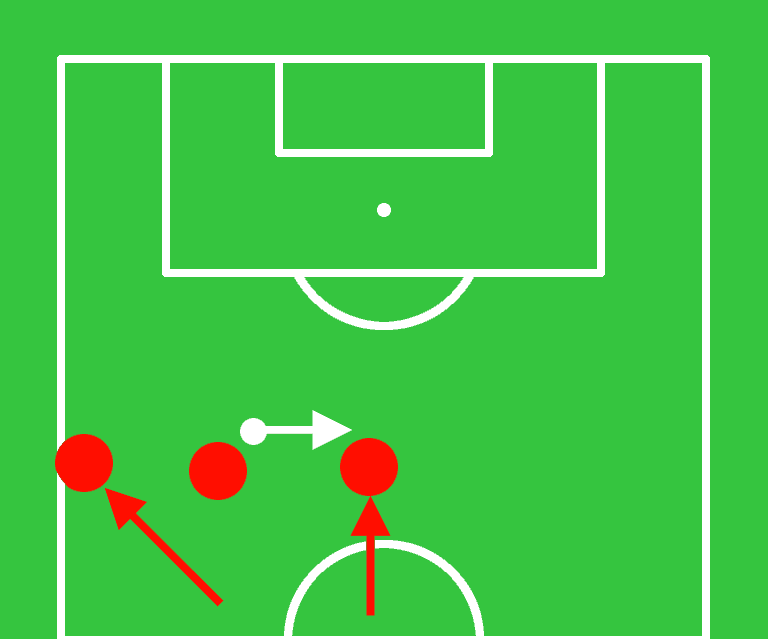 3. The ball is passed to the opposite side as the other two players advance
This drill is performed in groups of three. Each group must advance with the ball forward using only the square pass. The attackers must be spread out with one on the left (L) one on the right (R) and one in the center (C). There are several variations of this drill. In this example, the ball is always dribbled to the middle and passed to the outside. The emphasis should be on the square pass where the ball is played wide instead of forward.

This is a fun warmup drill that can be performed inside the penalty box or a smaller rectangular area. Each player has a ball and must dribble while remaining inside the box. After several minutes, the players are allowed to knock any ball out of the box. Players who lose their ball are instructed to leave. The drill continues until there is only one person left inside the box.

Two teams of players try to maintain possession of the ball in a confined area. This drill is used to teach passing. Encourage the players to spread out when they have the ball. Restrictions could be added for increased difficulty. For example, prohibit the players from making return passes or limit on the number of allowed touches per player. 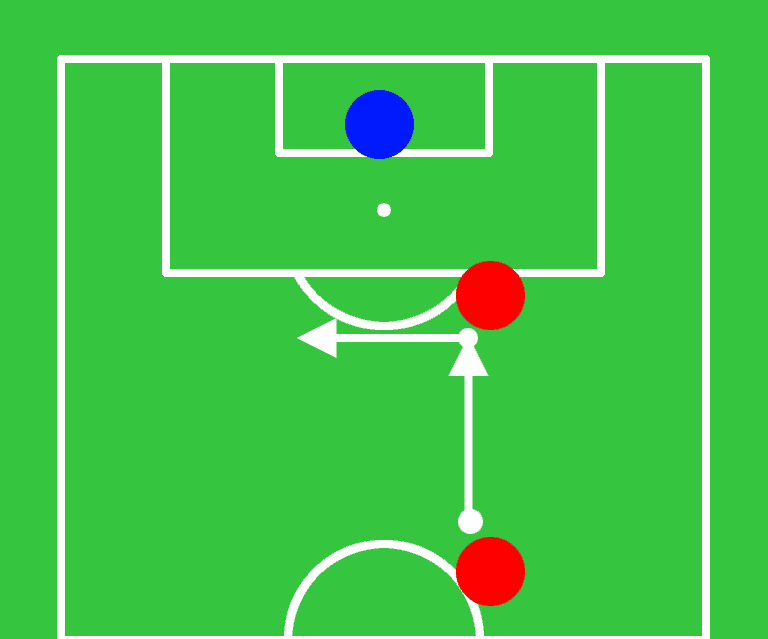 1. The first attacker from the queue makes a pass to the distributor who serves the ball for a shot 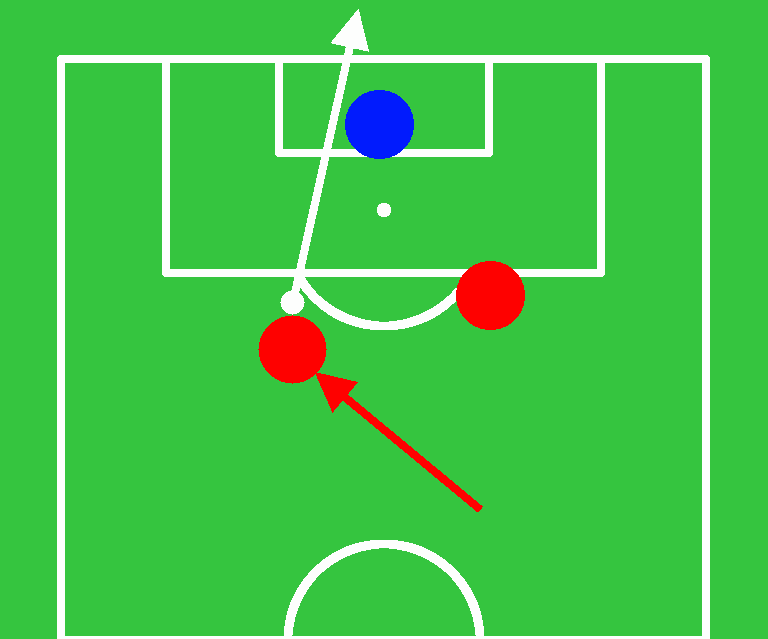 2. The attacker receives the pass and shooots from outside of the box
This is a good drill to warm up for a game or scrimmage. There is a distributor on top of the penalty box and a queue of attackers. Each attacker in the queue has a ball and the drill begins with the player in the front of the queue making a pass to the distributor. Next, the distributor immediately serves the ball for a shot that the attacker must finish. The shot must be taken outside of the penalty box at which point the drill continues with the next player in the queue. Attackers must be able to the finish the shot without controlling the ball. 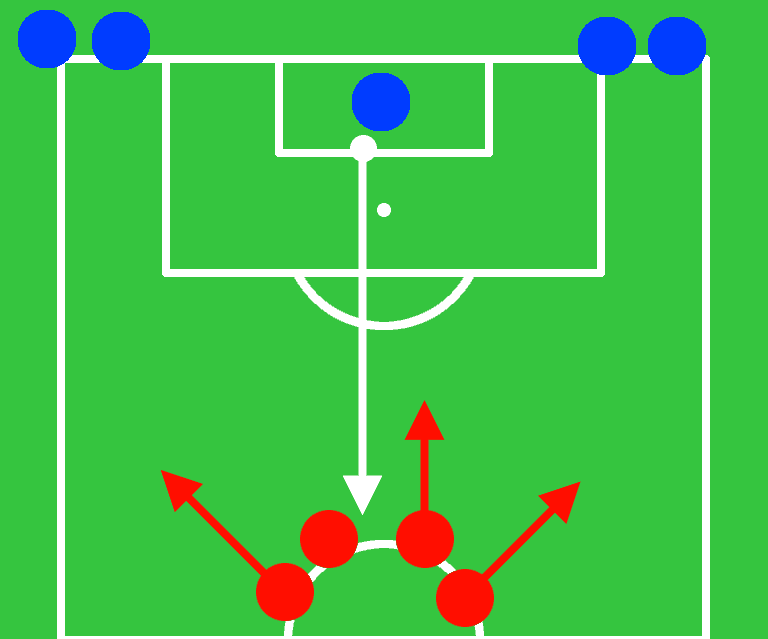 1. The goalkeeper punts the ball 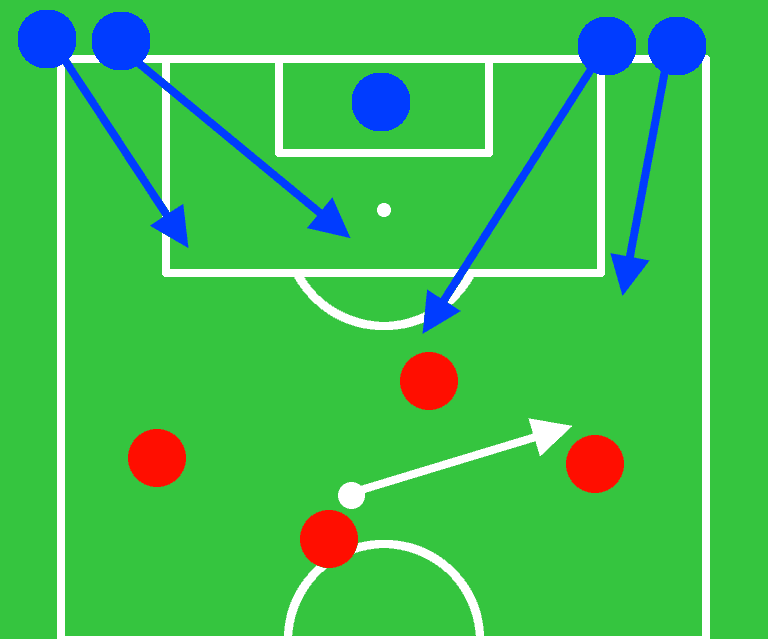 2. Players enter the pitch when the ball lands
This is an attacking drill with at least eight players including a goalkeeper. There are four attackers on the midfield line and four defenders on the goal line. The keeper punts the ball and play begins as soon as the ball has landed. At that point, the defenders enter the pitch trying to gain possession and complete 7-10 passes. Inversely, the attackers are required to score or shoot before completing 7-10 passes. 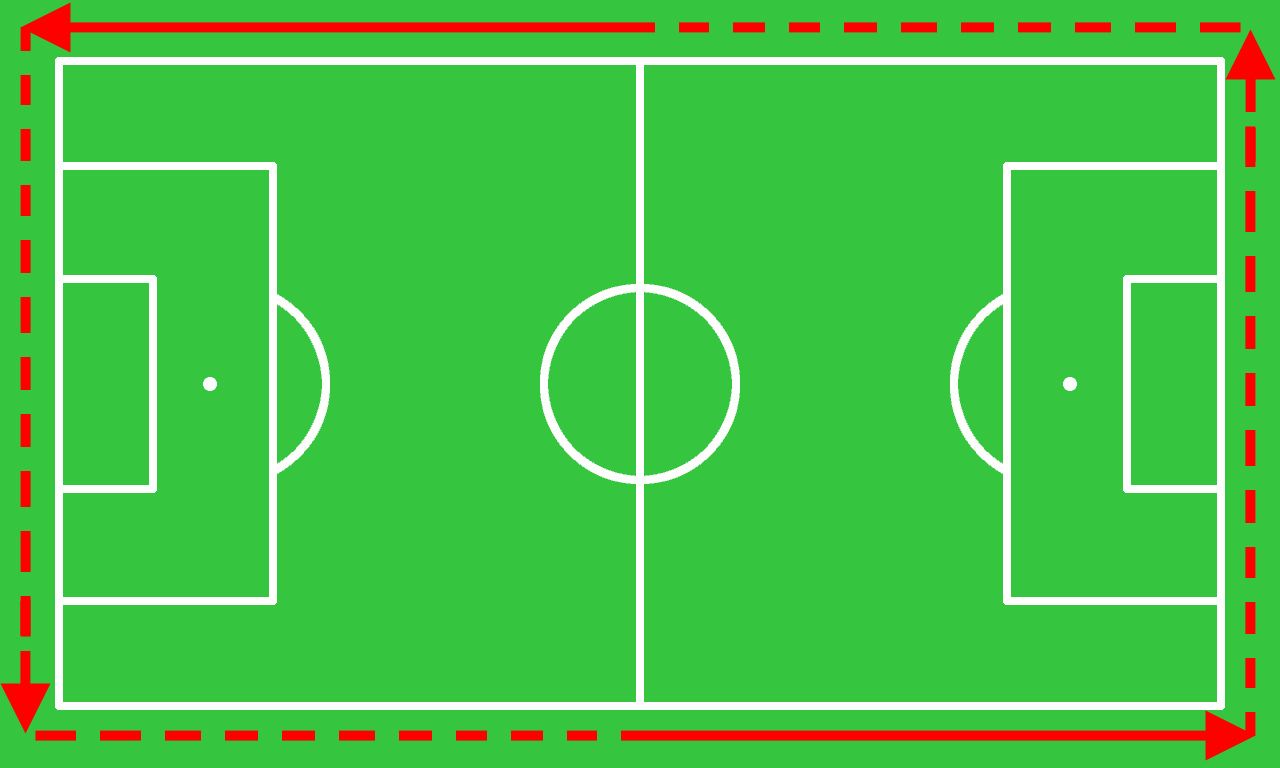 Solid lines denote sprints whereas dashed lines denote jogging
Start running laps around the field, alternating between light jogging and sprints. You are supposed to alternate each time you reach a corner flag or the midfield line. If you feel out of breath, slow down during the jogging segments so that you have more time to recover. 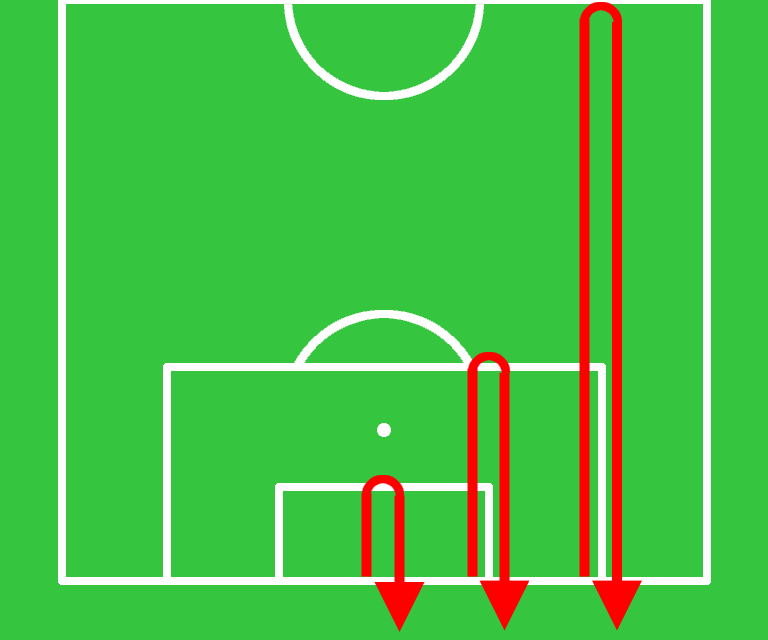 Stand on the goal line, facing the field. Sprint up to the 6 yard line (1) and back. When you return to the goal line, rest for 10-15 seconds and sprint again, this time to the 18 yard line (2) and back. After a second brake, sprint to midfield (3) and so on. One repetition consists of five sprints (1,2,3,2,1). Remember that you are supposed to sprint in both directions so there's no reason to be slowing down before you reach the goal line. Try to change direction as quickly as possible. 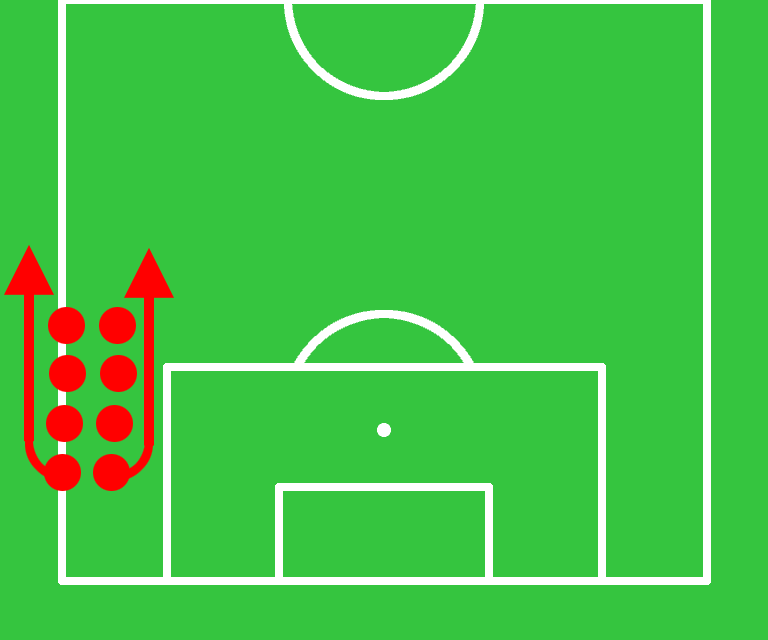 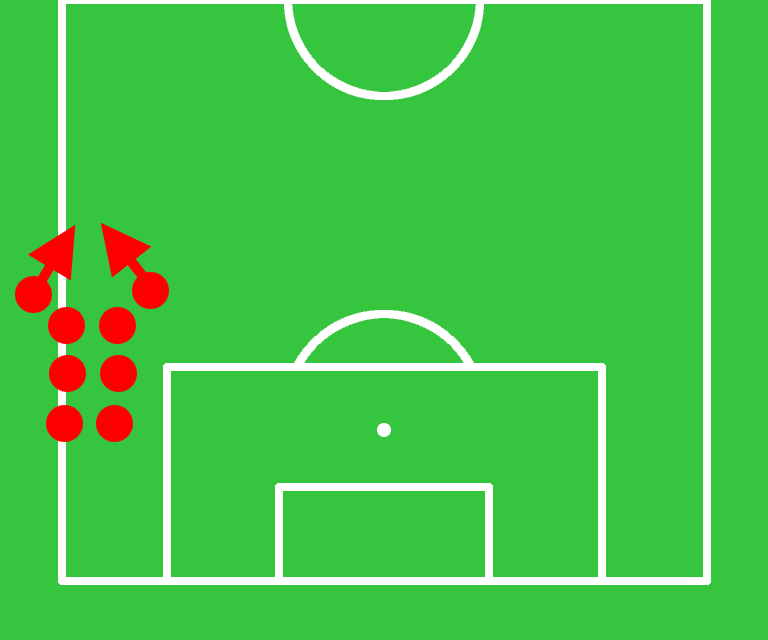 This drill requires a minimum of eight players (preferably an even number). Two lines of players are jogging together around the pitch. The last pair of players race to the front of the line. As soon as they reach the front, a signal is given for the next pair of players and the process repeats. Notice that the entire group is jogging continuously during the sprints.